After meeting with the Washington Football Team earlier this week, Bobby McCain will join the defending NFC East champions. The parties agreed to a one-year deal Friday, Adam Schefter of ESPN.com tweets. 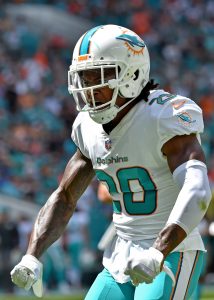 The Dolphins released the veteran defensive back last week. Now, McCain will follow Ryan Fitzpatrick to the nation’s capital. McCain has worked as both a starting safety and cornerback in his six seasons as a pro.

A former fifth-round pick, McCain joined the Dolphins two regimes ago. But he endured and signed an extension with the Chris Grier-era front office. The Dolphins moved McCain from cornerback to safety in 2019. After an injury-shortened season, the veteran bounced back to play in 16 games for the 2020 Dolphins edition. He will join Washington’s Landon Collins-led safety corps.

Washington may be lining up McCain, 27, to play alongside Collins. The team has Kamren Curl, a seventh-round pick last year, in place at safety and used a fifth-round pick recently on Darrick Forrest. Although McCain ranked as Pro Football Focus’ No. 55 overall safety last season, he brings considerable experience (55 pro starts) and possesses the versatility that would allow Washington to use him in multiple capacities.

Bobby McCain is already lining up his suitors. After getting released by the Dolphins earlier today, the veteran safety is set to meet with Washington on Monday, reports ESPN’s Adam Schefter (via Twitter).

The 2015 fifth-round pick had become a staple of the Dolphins’ defense over the past six years, but he saw a drop off in play during the 2020 campaign. While his counting stats were fine (46 tackles, five passes defended, one interception in 16 games (15 starts)), he ranked just 55th out of 94 qualified safeties, per Pro Football Focus. The Dolphins ultimately decided to pivot to younger (and, of course, cheaper) options at the position, spelling the end of his tenure in Miami.

Following news of McCain’s impending release, there were some whispers that Miami could simply be leaking the news with the hope of making a trade. However, the team officially announced the transaction this afternoon.

Washington has an opening for a free safety, and McCain’s versatility means he could certainly fill that slot. Per JP Finlay of NBC Sports Washington, head coach Ron Rivera has indicated that the organization would audition free agents for the gig after the draft. Other than a free agent addition, the team could end up turning to fifth-round rookie Darrick Forrest.

The Dolphins have informed safety Bobby McCain that he’ll be released today (Twitter link via ESPN.com’s Adam Schefter). By cutting the team captain, the Dolphins will nix the final two years of his four-year, $27MM deal.

McCain was set to count for $7.14MM against the 2021 cap. The Dolphins will be left with just $1.48MM in dead money while saving $5.66MM on the books. At least, that’ll be the breakdown if he’s formally released. NFL teams will occasionally leak word of an impending release in order to stir up trade talks. That could the case here, with the Dolphins aiming to get something in return for McCain before the end of the business day.

McCain, a 2015 fifth-rounder, has been a staple of the Dolphins’ defense over the last six years. All in all, he’s started in 55 of his 87 games, collecting seven interceptions and four sacks along the way.

Last year, McCain was first-string for 15 of his 16 games, notching one INT, 46 stops, and five passes defensed. However, his performance left something to be desired — he ranked just 55th out of 94 qualified safeties, per Pro Football Focus. Ultimately, the Dolphins chose to go younger and cheaper. One way or another, they’ll shed McCain’s contract while working third-rounder Jevon Holland into the rotation.

Without McCain, the Dolphins project to use Eric Rowe, Brandon Jones, and Holland as their top safeties.

Dolphins S Bobby McCain Expects To Be Ready For Week 1

Dolphins safety Bobby McCain saw his 2019 campaign cut short by a shoulder injury, and he subsequently underwent surgery. Per Barry Jackson and Adam H. Beasley of the Miami Herald, McCain’s recovery is going well, and he plans to be ready for the start of the 2020 season.

As Jackson and Beasley note, McCain is likely to remain at safety. The 2015 fifth-rounder spent the first four years of his career at cornerback, but he converted to safety last season and held up reasonably well in coverage. In nine games (eight starts), he recorded 25 tackles and two interceptions.

For his part, McCain is willing to play anywhere. “It’s not my decision to make decisions,” he said. “My job is just to play football. So you know I love playing football. I love doing what I do. I am able to do it all.”

McCain also indicated that, even though safety is generally a more physical position than corner, he is not worried about another injury. “You can get hurt doing anything, making a simple tackle,” he said. “Sometimes the easiest plays to make are the ones that hurt the most. It’s just football. Things happen.”

Miami is deeper at corner than it is at safety, which is one of the reasons why McCain is likely to stay put in 2020. The Dolphins did select Texas safety Brandon Jones in the third round of this year’s draft, but the starting FS job appears to be McCain’s for now.

The two longest-tenured Dolphin defenders will finish their seasons on injured reserve. Miami placed safeties Reshad Jones and Bobby McCain on IR, where they will join cornerback Xavien Howard.

This strips the Dolphins’ secondary of two key veterans — in a year that’s seen numerous Miami vets depart or head to IR — and creates questions about Jones’ future with the franchise. Jones is by far the Dolphins’ longest-tenured player, at 10 years, but he was a trade candidate throughout this offseason.

A chest injury cost Jones four games this season, but he returned for the Dolphins’ Week 11 matchup against the Bills. Against the Browns, the Dolphins will deploy a skeleton crew featuring Eric Rowe and a host of young players. McCain suffered a shoulder injury against Buffalo.

The Dolphins gave Jones a $12MM-per-year extension in March 2017; the two-time Pro Bowler’s play since, however, has not quite lived up to that price. Jones will turn 32 in February and stands to count $15.6MM toward Miami’s 2020 cap. The Dolphins could save nearly $8MM by releasing Jones next year, though that move would cost them almost as much in dead-money charges.

Miami offered Jones to Pittsburgh before sending Minkah Fitzpatrick there this year, but the former’s high salary impeded trade talks this offseason. For a Dolphins team that’s made no secret of a full-scale rebuild, as the exits of most of the franchise’s previous core have shown, it will likely not have an issue jettisoning Jones next year.

McCain has started eight games for Miami this season and 40 since joining the team as a 2015 fifth-round pick. He’s attached to a four-year, $27MM extension the Dolphins gave him in 2018. With only $5.5MM in 2020 salary due, the 26-year-old defender has a better chance of returning next season.

The Vikings have added former NFL kicker Nate Kaeding as a kicking consultant, according to Andrew Krammer of the Star Tribune (Twitter link). The hire is expected to be formally announced in the near future. Earlier this offseason, Vikings head coach Mike Zimmer spoke about adding another special teams coach to his staff, and Kaeding has been working with Minnesota’s kickers a few times per week. Now 37 years old, Kaeding was a third-round draft choice of the Chargers in 2004, and went on to spend nine years with the club. Kaeding, who also spent late-career time with the Dolphins and Buccaneers, posted a career field goal conversion rate of 86.2%.

Patriots wide receiver Josh Gordon could return to the field by training camp, although that’s far from a certainty, according to Ian Rapoport of NFL.com. Gordon was banned indefinitely from the NFL in December after violating the terms of his conditional reinstatement under the league’s substance abuse policy and is still in a rehabilitation facility. While it’s unclear when Gordon will leave rehab, it could be in the near future, at which point he plans to train in Florida. New England is supporting Gordon and paying for his treatment, so a return to the club is certainly possible. From a contractual standpoint, Gordon will be a restricted free agent this offseason.

Sunday’s loss to the Patriots was rough, and this Monday isn’t looking any brighter for the Dolphins. The club has learned that cornerback Bobby McCain and center Daniel Kilgore both suffered injuries in Sunday’s 38-7 drumming, according to Barry Jackson of The Miami Herald (on Twitter). McCain is dealing with a knee injury while Kilgore has a torn triceps. 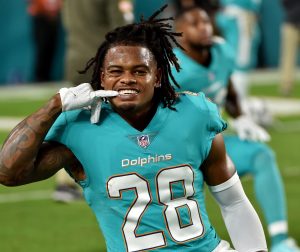 There is no timetable for Kilgore, but a torn triceps is a serious injury with a high risk for a repeat tear if the player is not given enough time to heal properly. Logic dictates that Kilgore is a candidate to go on injured reserve with a chance to return later this year, but we’ll have to wait for more info on that front.

McCain, meanwhile, is expected to miss two or three weeks. The slot specialist is an integral part of Miami’s defense – as evidenced by his four-year, $27MM extension – so the Dolphins are hoping to get him back on the field as soon as possible. At minimum, he’ll miss contests against the Bengals and Bears.