The Panthers cut safety Da’Norris Searcy, according to a team announcement. In a related move, the club also waived offensive tackle Isaiah Battle. 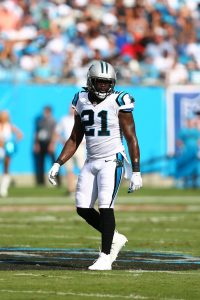 Searcy joined the Panthers on a two-year, $5.7MM deal lasty offseason with the ability to make up to $3.1MM in 2017. A former fourth-round pick, Searcy managed 12 tackles and one interception in his first year with Carolina while grading as the NFL’s No. 61 safety among 87 qualifiers, per Pro Football Focus.

Last year, Searcy missed eight games due to a pair of concussions suffered in September and did not make it back to the field despite being designated for return in late November. By releasing him, the Panthers will incur a modest $650K cap hit while saving $1.76MM.

Without Searcy, 2018 third-round pick Rashaan Gaulden appears to be in line for a starting safety spot opposite of Eric Reid. It’s also possible that the Panthers could add a veteran safety in the offseason to compete for the gig.

Battle, 26, joined Carolina on a futures deal in January. The 6’7″ Clemson product has bounced around the league since entering as a supplemental pick of the Rams in 2015, but has yet to see live action.