Good news for Falcons fans, as 2019 first-rounder Kaleb McGary has returned to full practice, per Vaughn McClure of ESPN.com (via Twitter). McGary, who resumed on-field activities last week after undergoing a cardiac ablation procedure at the end of July, is now set to compete for Atlanta’s starting RT job. 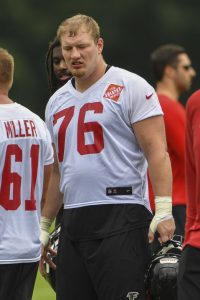 Although a heart procedure sounds frightening, McGary has had the same operation twice before, and it is a minimally-invasive surgery. GM Thomas Dimitroff previously stated that he was comfortable with McGary’s health situation, and as of right now, it appears everything is on the right track.

McGary, of course, has a lot of ground to make up, but his competition for the RT job is not particularly inspiring. Ty Sambrailo has had a poor preseason and is presently a limited participant in practice due to a shoulder injury — as McClure notes in a separate tweet — and Matt Gono is a former UDFA who has yet to see regular season action.

Per McClure (Twitter link), head coach Dan Quinn has expressed confidence in all three of those players, but obviously the team would prefer that McGary takes the job and runs with it.

McGary, the No. 31 overall pick in this year’s draft, was the second O-lineman Atlanta added in the first round. The club also selected Boston College guard Chris Lindstrom in an effort to get better while also getting younger on the offensive front.

Falcons first-round offensive lineman Kaleb McGary is set to resume on-field activities after undergoing a cardiac ablation procedure at the beginning of the preseason. After the lineman missed his team’s first three preseason games, coach Dan Quinn made it clear that they’ll bring the rookie along slowly.

“The first part is, like today, participating in the walkthrough,” Quinn told Will McFadden of the team’s website. “And then he’ll get a good bit of the field work with Marty [Lauzon] and the athletic performance staff. And then once that’s good, we’ll be out a couple of weeks, make sure the conditioning is right. And then back into individual [drills], and then you get back into team [drills]. So we really stay strict to the policy we put into place for the guys to return to it. We just don’t back off of it, especially if you’ve been out for, in his case, two weeks.

“It’s a good sign that he had such a good report. But, like all players, we’re going to do the right thing and make sure nothing comes up.”

McFadden notes that the rookie was working with the second team during the early parts of preseason, but he was expected to emerge as the Falcons’ starting right tackle.

Some more notes from around the NFC:

Kaleb McGary does not have a return timetable. One of the Falcons’ two first-round offensive linemen, McGary is sidelined indefinitely because of a heart procedure he recently underwent. 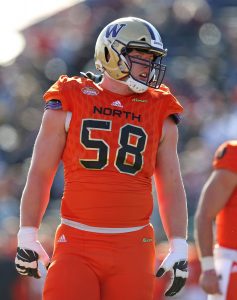 The Falcons can expect to be without the former Washington Husky for a while, but they are not preparing for a full-season absence. Dan Quinn said (via NFL.com’s Mike Garafolo, on Twitter) the team is “by no means” planning a redshirt season for the talented blocker. Reports of the procedure’s effectiveness have been good thus far, Quinn added.

The minimally invasive operation McGary underwent is not new territory for him. He had the cardiac ablation procedure done twice in college and missed approximately two months’ worth of time after each instance. It seems reasonable Atlanta will have to make adjustments to its projected Week 1 line, however.

At full strength, Atlanta’s line was supposed to include two Pro Bowlers, two first-round picks and a free agent addition (either James Carpenter or Jamon Brown). Now, guard Chris Lindstrom looks like he will be the only rookie in the Falcons’ lineup in September. McGary was in line to eventually seize the team’s right tackle job. Ty Sambrailo, who signed an offseason extension, would stand to fill that spot now.

Falcons rookie offensive lineman Kaleb McGary underwent a cardiac ablation procedure on Wednesday, per a team announcement. McGary had this surgery twice before and missed approximately two months after the last operation while at Washington.

The good news for the first-round pick is that the cardiac ablation procedure is a minimally-invasive surgery. The club will have a better sense of his timetable after he comes out of the operating room. 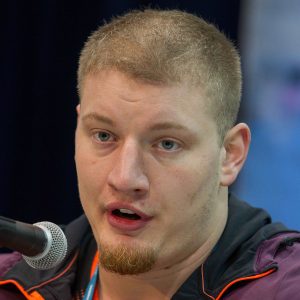 Rams Trade No. 31 To Falcons

Atlanta will select Washington offensive tackle Kaleb McGary. For the second time in the first round, the Falcons will use a first-round pick on a position that they’d already fortified in free agency. Atlanta signed guards Jamon Brown and James Carpenter but used their initial first-round pick on fellow interior lineman Chris Lindstrom. After extending right tackle Ty Sambrailo, the Falcons will now add competition in McGary.

There’s been a lot of talk about the CBA recently, and the potential for a work stoppage when it expires after the 2020 season. We just heard that the owners and players held their first negotiating meetings, and now we have more details on what exactly went down. A handful of owners and members of the NFLPA’s executive committee met for “roughly five hours,” earlier this week, Albert Breer of SI.com was told. Breer describes it as a big deal and writes that it “shouldn’t have flown under the radar.” As Breer points out, NFLPA executive director DeMaurice Smith had said a couple of years ago that a lockout when the CBA expired was a “virtual certainty,” so the fact that they’re having positive conversations this far out is a huge development.

Breer notes that the owners were the ones who initiated this meeting, which is a big departure from when the owners decided to opt out of the CBA years in advance last time around. Overall, Breer describes the meeting as a “good start.” There’s still a long way to go, and the threat of a work stoppage is still a very real possibility, but things don’t seem nearly as dire as they once did. Breer points to the rapidly increasing cap as one thing that may help pacify players in negotiations.