The Bengals have re-signed defensive end Amani Bledsoe on a one-year contract, per a club announcement. Financial terms of the deal were not disclosed. 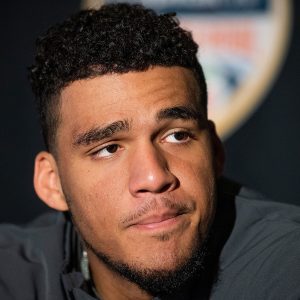 Bledsoe started his career with the Titans as an undrafted free agent in 2019. The Oklahoma product spent that year on Tennessee’s practice squad, then joined the Bengals during 2020’s training camp. He went on to make the cut and see time in 14 games last year, including four starts. All in all, he tallied 17 tackles and two pass defenses.

The Bengals are expected to continue hunting for edge rushing help in the draft with Carl Lawson and Geno Atkins out of the picture. There’s also the second-wave of veteran free agents to consider. The Bengals weren’t able to land Sheldon Rankins (like Lawson, he chose the Jets instead) but they do have interest in Ryan Kerrigan. Washington’s all-time sack leader turns 33 in August, but he could likely be had on a low-cost, one-year deal. Other notable and available names like Kawann Short and Jurrell Casey could also appeal to Cincinnati.

A couple of minor moves from the past day to pass along:

Bledsoe tested positive for COVID-19 this morning, Ian Rapoport of NFL Network tweets, although obviously there wasn’t enough concern to cancel their game against the Dolphins. Bledsoe had been playing a big role on Cincy’s reshuffled defensive line in recent weeks, notching almost half the defensive snaps. Johnson and Emanuel both missed a few games with concussions and returned for Houston today.