While it was once thought this would be the offseason the Jets overhauled their offensive line, that could well happen in 2020. The Jets, who ranked 32nd in adjusted line yards last season, will return three starters from last season’s group. But when new GM Joe Douglas begins his first free agency period next year, Adam Gase expects him to be aggressive in bolstering the front.

“I think the fact that our GM is a former offensive lineman, I’m pretty sure you guys know that he’s going to be looking for those type of guys,” Gase said, via Manish Mehta of the New York Daily News. “His type of linemen: tough, physical, smart guys that can play multiple positions and play both sides of the line. I think that’s what he’s going to be combing the Earth for.”

Starters Kelvin Beachum and Brandon Shell are playing on expiring contracts, and recent Douglas acquisition Ryan Kalil is certainly a year-to-year player at this point in his career. The Jets drafted tackle Chuma Edoga in Round 3, but that pick came under Mike Maccagnan‘s watch (and largely not Gase’s). So, next year figures to be telling about Douglas’ blueprint up front.

Here is the from the AFC’s Big Apple franchise:

Daniel Brown is heading to New York. The former Ravens and Bears tight end is signing with the Jets, reports Ralph Vacchiano of SNY (via Twitter). 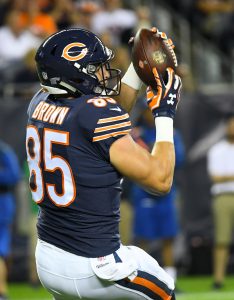 After a two-year stint with the Ravens, the former undrafted free agent had spent the past three seasons with the Bears. He was relatively productive offensively between 2016 and 2017, hauling in 29 total receptions. However, he went without a catch in 2018 despite appearing in 14 games (he also contributed on special teams). Pro Football Focus ultimately gave him adequate grades despite his low snap count.

In New York, Brown should have a chance to play a backup role behind starter Chris Herndon. The Jets are also rostering Jordan Leggett.

We heard last week that Brown had met with the Lions. That was the only reported meeting for the tight end.

Tight end Daniel Brown is set to visit with the Lions today, reports Dave Birkett of the Detroit Free Press (via Twitter). The reporter notes that the free agent has four teams interested in his services.

After a two-year stint with the Ravens, the former undrafted free agent out of James Madison has spent the past three seasons with the Bears. He was relatively productive offensive;ly between 2016 and 2017, hauling in 29 total receptions. However, he went without a catch in 2018 despite appearing in 14 games (he also contributed on special teams). Pro Football Focus ultimately gave him adequate grades despite his low snap count.

The Bears have placed quarterback Brian Hoyer on injured reserve, promoted offensive lineman Cornelius Edison from their practice squad and claimed tight end Daniel Brown off waivers from the Ravens, according to Aaron Wilson of the Houston Chronicle (Twitter links). 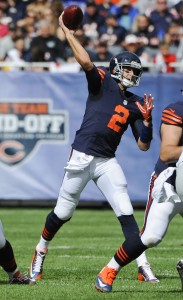 Hoyer left the Bears’ 26-10 loss to Green Bay on Thursday with a broken left arm and underwent surgery Sunday. The journeyman originally entered the Bears’ lineup when Jay Cutler went down with a sprained thumb in Week 2. Hoyer impressed in Cutler’s absence, completing more than 68 percent of his passes for 1,396 yards, six touchdowns and no interceptions. His placement on IR means he won’t be eligible to come back until Week 16.

Fortunately for the Hoyer-less Bears, Cutler will be ready for their Week 8 tilt against the NFC North rival Vikings, head coach John Fox said Monday.

Brown appeared in two of the Ravens’ games this year and failed to register any receptions. As a rookie last season, he totaled six grabs in as many games. He’ll now join a Chicago tight end group that includes Zach Miller, Logan Paulsen and Ben Braunecker.