The NFL announced that Falcons cornerback Jordan Miller has been suspended for four games due to a violation of the league’s policy on performance-enhancing substances. The suspension will go into effect immediately, with the remaining three games on the ban being enforced in 2020. 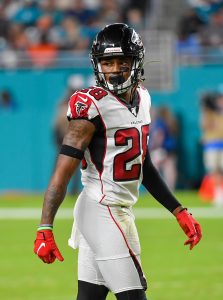 In his freshman season, Miller appeared in ten games and notched four tackles and one fumble recovery. Next year, he may get a better chance to showcase his bump-and-run coverage skills, but, first he’ll have to sit out the early weeks of the 2020 season.

The Falcons will close out the 2019 season against the Buccaneers, without Miller on the roster. The game won’t have any playoff implications, but a win would give the 6-9 Falcons four straight wins to close out the year.

You can find Friday’s minor transactions from around the NFL below, with the latest moves added to the top of the page throughout the afternoon and evening….

We’ll round up the day’s minor transactions from around the NFL right here, with additional moves listed at the top of the page throughout the afternoon and evening:

Shaw, who was cut from the Browns earlier this offseason, was a standout pass catcher at Florida State University in 2013. He caught 54 passes for almost 1,000 yards and six touchdowns as a senior, while also serving as the main punt returner for the National Champion Seminoles.