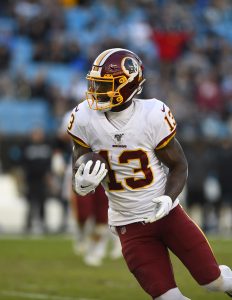 L. Miller is the most recognizable member of the trio of players now seeking new employment. The 2018 Pro Bowler, who has two 1,000-yard rushing seasons on his resume, suffered a torn ACL during the 2019 preseason and missed all of the 2019 campaign as a result. He hooked on with the Patriots last August but did not survive final cutdowns. He ultimately wound up on the Bears’ practice squad and appeared in one game for Chicago before being poached by WFT. Washington re-signed him to a one-year pact in March and has now cut him loose after one preseason game.

L. Miller, 30, actually had a fair showing in that preseason contest against New England on Thursday evening. He had three carries for 14 yards and three receptions for 10 yards and a TD. WFT, however, has elected to move on with the likes of J.D. McKissic, Peyton Barber, and Jonathan Williams behind Antonio Gibson on its RB depth chart.

Harmon, a 2019 sixth-rounder, at one time looked like he might have a real future with Washington. His collegiate resume, size, and upside suggested he could have been a much higher draft choice, and he showed some flashes towards the tail end of his rookie season, finishing with 30 catches for 365 yards. Unfortunately, a torn ACL last July wiped out his entire 2020 season, and the club added Samuel and Adam Humphries in free agency this offseason while using a third-round pick on Dyami Brown. John Keim of ESPN.com classifies Harmon’s departure as a bit of a surprise but notes that the team is comfortable with its other options (Twitter link).

WFT will certainly be happy to have Samuel, who was dealing with a groin issue, back on the field. Samuel landed a three-year, $34.5MM contract from Washington in March, and his speed and abilities as a receiver and runner should complement WR1 Terry McLaurin nicely.

C. Miller, meanwhile, signed as a UDFA with the Seahawks last year and also spent some time on the taxi squads of the Titans and Cardinals. Arizona waived him in May, and WFT liked him enough to claim him off waivers, but not enough to keep him on the roster at this stage of the summer.

Redskins wide receiver Kelvin Harmon suffered a torn ACL while working out, according to Ian Rapoport of NFL.com (on Twitter). Needless to say, he’ll be unavailable for the 2020 season.

A sixth-round pick in 2019, Harmon showed serious promise as a rookie. He reeled in 30 catches for 365 yards, but he’ll have to wait until 2021 to build on that performance. His collegiate track record also indicates that there are bigger things to come. At N.C. State, Harmon finished out with back-to-back 1,000-yard seasons. In his final year on campus, he went off for 81 grabs, 1,186 yards, and seven touchdowns.

Harmon was set to feature as one of the Redskins’ top receivers, alongside Terry McLaurin and Trey Quinn. With Harmon no longer in the picture for 2020, Cam Sims, Steven Sims Jr., and fourth-round pick Antonio Gandy-Golden figure to move up the pecking order. Emanuel Hall, who was set to fight for a job while on the 90-man roster, is also out for the season. Meanwhile, the team is waiting to see what happens with Cody Latimer following his May arrest. 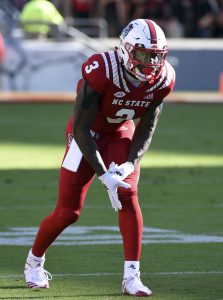 “I have prayed and discussed the path forward with my family and we have decided that it is time for me to proceed to the next chapter in my football life,” writes Harmon. “That chapter will be playing professional football in the National Football League. To this end, I am relinquishing my college eligibility, effective immediately, and declaring myself a professional. I am applying for entry into the 2019 NFL draft. I will not be playing in the upcoming Gator Bowl but my support for my teammates will go unchanged.”

Harmon’s role in the Wolfpack offense steadily grew over the past three seasons. After managing only 27 receptions during his freshman year, Harmon totaled 69 catches for 1,017 yards and four touchdowns, earning second-team All-ACC honors along the way. This season, Harmon posted his best results yet (81/1,186/7) and was named first-team All-ACC.

Harmon certainly has the size of a No. 1 wideout, as he stands 6’3″, 214 pounds. In his most recent 2019 big board, Chris Trapasso of CBSSports.com ranked Harmon as the 11th-best prospect in the draft, so the NC State product should stand a good chance of being a first-round selection. In a scouting report of Harmon, Trapasso noted the Liberia native’s ability to win contested catches and his “impressive speed and wiggle” after the catch.