Jared Norris has found himself another NFL gig. The Redskins announced today that they’ve signed the veteran linebacker (via Charean Williams of ProFootballTalk.com) 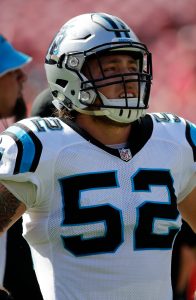 After sitting on the injured reserve for most of the 2018 campaign with a toe injury, Norris found himself out of football in 2019 after getting cut by the Panthers. The last time the 26-year-old appeared in a regular season game was Week 3 of the 2018 season.

The Utah product originally joined the Panthers as an undrafted free agent in 2016, and he proceeded to compile 11 tackles in 28 total games over three seasons. As Williams notes, Norris has never played a defensive snap in his entire career, although he’s taken part in 526 special teams plays.

The Redskins made the move despite not having a definitive general manager. Without a replacement lined up for Bruce Allen, Redskins VP of Player Personnel Kyle Smith has taken the lead in the front office.

Just before the start of free agency, the Panthers are locking up one of their own. Carolina is re-signing linebacker Jared Norris to a two-year deal, according to Ian Rapoport of NFL Network (Twitter link).

Terms of the deal weren’t announced, but it’s likely pretty close to the minimum. Rapoport notes that the team gave him a $150K signing bonus, which would seem to indicate they plan on him making the team out of training camp. Norris was a standout linebacker at Utah, but went undrafted in 2016. He latched on with the Panthers, and was able to make the team as a rookie.

He appeared in just three games this past year after he was placed on injured reserve in October with a toe injury. Norris hasn’t played a single snap on defense in his three years with the team, but has been a key special teamer when healthy. An inside linebacker, Norris will provide emergency depth on defense and should be making plays on special teams again next year.

The Panthers have agreed to terms with seven undrafted free agents, the team announced today in a press release. Here’s a breakdown of the players who will officially be joining Carolina’s 90-man roster, according to the club: