Keelan Doss is headed back to Oakland after all. Doss became a breakout star on HBO’s ‘Hard Knocks’, but was released by the Raiders at final cuts and ended up signing to the Jaguars’ practice squad. 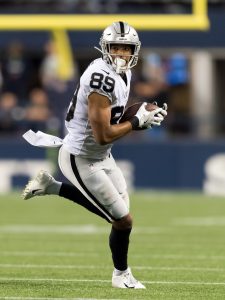 When the Raiders cut Antonio Brown, they tried to sign Doss back. Jacksonville then agreed to pay him a rookie minimum salary while on the practice squad in order to keep him. But now the Raiders have upped their offer to something he simply couldn’t refuse, and Doss is signing back with the team, according to Mike Garafolo of NFL Network (Twitter link). To lure him back, Oakland is giving Doss a whopping $300K signing bonus and $495K fully guaranteed base salary.

It’s a massive step-up for Doss. In just a couple of days, he went from making a non-guaranteed practice squad salary to getting $795K guaranteed. Giving a player a multi-hundred thousand dollar signing bonus to come off another team’s practice squad is nearly unprecedented, and shows how badly the Raiders wanted receiver help after Brown’s departure.

Doss is an undrafted rookie from UC Davis. A native of the Bay Area, he’ll be completing a homecoming that was widely documented on the popular HBO series. Doss shined at times during the preseason, and set school records for touchdowns and all-purpose yards.

One of the crazier sagas in modern NFL history concluded Saturday. The Raiders released Antonio Brown after voiding his guarantees, setting themselves up for another potential decision on Brown requiring an arbitrator. Jon Gruden addressed the decision, which came a day after he said Brown would play in Week 1 against the Broncos.

“We just have exhausted everything,” Gruden said. “We tried every way possible to make it work. And all I’m gonna say is it’s disappointing. We did everything we could to make this work. I’m sorry it didn’t. I apologize, but I’ll tell you, I’m very proud of what we did as an organization to try. I wish Antonio the best. I’m sorry we never got a chance to see him in silver and black. … I just don’t think it worked. It didn’t fit here.”

Here is the latest from this round of AB fallout: