Following a visit with Wayne Gallman, the 49ers agreed to terms to add the veteran to their backfield mix on Wednesday, Field Yates of ESPN.com tweets.

The four-year Giants back saw his role increase last season, when Saquon Barkley went down in Week 2. Gallman will join a 49ers backfield that includes Raheem Mostert and Jeff Wilson.

Gallman, 26, led the Giants with 682 rushing yards last season. Despite Big Blue bringing in veterans Alfred Morris and Devonta Freeman, Gallman kept his job as Barkley’s top understudy. He averaged a career-best 4.6 yards per carry and rushed for six touchdowns in his contract year.

San Francisco’s backfield featured Tevin Coleman and Jerick McKinnon last season; neither are part of the current 49ers equation. Coleman signed with the Jets, and McKinnon is a free agent. Both Mostert and Wilson are signed to low-cost deals, and each missed extensive time due to injury last season.

The 49ers ended up using five backs during the 2020 season, with Jamycal Hasty also contributing. Hasty remains on San Francisco’s roster and, unlike Mostert and Wilson, is signed beyond 2021. The former UDFA will soon vie for time with Gallman as well.

After four seasons with the Giants, Wayne Gallman is exploring his options in free agency. The 49ers are interested in the former fourth-round pick.

The 49ers are hosting Gallman on a visit, according to ESPN.com’s Field Yates (on Twitter). Gallman served as Saquon Barkley‘s backup for three seasons and saw extended time last year after the Pro Bowler’s Week 2 ACL tear.

This news comes after the 49ers’ unsuccessful pursuit of Giovani Bernard, who chose the Buccaneers over the 49ers and Seahawks. The 49ers return Raheem Mostert and Jeff Wilson, who are each attached to low-cost contracts, but appear to be searching for more backfield help. Tevin Coleman signed with the Jets, and former big-ticket signing Jerick McKinnon remains a free agent.

A pair of Clemson stars are expected to enter the 2017 NFL draft. Tigers head coach Dabo Swinney announced yesterday that quarterback Deshaun Watson and receiver Mike Williams will be honored during this weekend’s Senior Day, an indication that the two players are scheduled to graduate in December. Two other Clemson juniors, running back Wayne Gallman and wideout Artavis Scott, are also expected to graduate this winter. 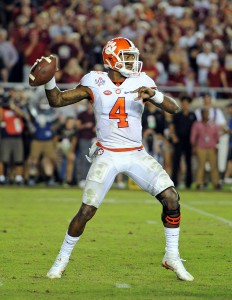 “They are seniors. Those guys indicated to me back in the summer that this was going to be it for them and they were graduating in December,” Swinney said (via Matt Connolly of TheState.com). “All of those guys are planning on moving on. We definitely want to honor them while we have the opportunity. They’ve earned it.”

Watson and Williams will be of particular interest to NFL teams, as the pair of offensive weapons are both projected to be first-round picks. Watson has connected on 64.4-percent of his passes this season, throwing for 2,497 yards and 24 touchdowns through nine games. The speedy third-year player has also rushed for 370 yards and a pair of touchdowns. A recent mock draft by Rob Rang of CBSSports.com projected Watson to go third overall to the Bears.

After having appeared in only one game in 2015, Williams has bounced back nicely this season. The wideout has hauled in 52 catches for 754 yards and five
touchdowns. Rang had Williams as the second wideout off the board (behind Washington’s John Ross), going 13th to the Chargers. 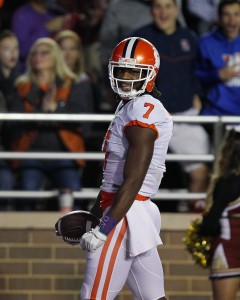 The other two offensive weapons are a bit tougher to project, as Connolly predicts Gallman and Scott will go in the third and fourth round, respectively. Gallman has run for 634 yards and eight scores this season, averaging a robust 5.3 yards per carry.

“Wayne is definitely ready. He’s going to make a great, great NFL player for somebody,” Swinney said. “People have no idea what they’re getting in that guy. He is something special.”

“This is one of the best football players we’ve had come to Clemson since I’ve been here. He is a great football player that just happens to play wide receiver,” Swinney said. “This kid is dynamite and so dependable, tough, hard to tackle, great special teams guy, fast. … He’s going to be a great pro. There’s no question he’s going to be a great player at the next level. He’s like the Swiss army knife. He’s got a lot of options.”