Two of the Saints’ most notable Saturday cuts will stay with the team. Both Anthony Chickillo and Margus Hunt opted to stay with New Orleans, joining the practice squad Sunday.

The Saints signed Chickillo, a five-year Steelers linebacker, and Hunt — a former first-round defensive lineman whom the Colts cut earlier this year — earlier this year. Each will represent a veteran slot on the Saints’ P-squad.

Teams are permitted, thanks to the COVID-19-altered rules, to carry six veterans of unlimited service time on their taxi squads this year. Here is New Orleans’ full squad:

The Saints are promoting offensive lineman Cameron Tom to the 53-man roster, according to Nick Underhill of The Advocate (Twitter links). The move comes just days after the Saints gave Tom a practice squad pay bump equivalent to the NFL’s minimum salary. 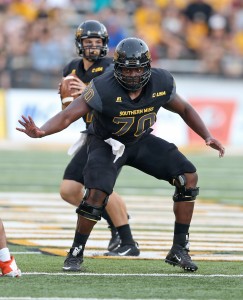 As it turns out, the Redskins were looking to sign Tom to their main roster. Unwilling to lose Tom, the Saints boosted his pay before moving to him to the 53-man roster today. The Saints had a spot open after parting ways with cornerback Sterling Moore on Wednesday morning.

Tom, 22, joined the Saints as a UDFA out of Southern Mississippi this offseason. The Saints will have to keep him on the 53-man roster if they want to keep him around – sneaking him through waivers to the practice squad no longer seems like an option.

Tom, who can play at guard as well as center, may help to fill in for guard Larry Warford. Warford is expected to miss several weeks with an abdominal injury.

Bruce Arians came up with the idea for the Cardinals to acquire Adrian Peterson, doing so after his team’s blowout loss to the Eagles. Arians was driving to the team facility when the concept emerged, Lars Anderson of Bleacher Report notes. The Cardinals coach watched every Peterson carry with the Saints to make sure the 32-year-old future Hall of Famer still had enough to be a solution for an Arizona rushing attack that still ranks last in the league because of its anemic start. Arians then took the idea to Steve Keim, who called Saints GM Mickey Loomis, Anderson reports.

“He ran hard and could get something out of nothing,” Arians said. “We had finesse backs on our team. I was looking for that power guy. He was it, brother, he was it.”

Immediately installed as Arizona’s starter, Peterson turned back the clock and rushed for 134 yards and two touchdowns in his Cardinals debut. The former five-time All-Pro said previously he wants to play into his late 30s, but that dialogue stopped in New Orleans. But Peterson has resumed that talking point now as a Cardinal, eyeing “four or five” more seasons.

“I felt like my ability was going to waste in New Orleans,” Peterson said, via Anderson. “The system just wasn’t a good fit for me. But I still want to play four or five more years. I still can run a high-4.3 40. And I’ve always loved getting the ball deep in the backfield, which is what we’re doing here. I feel like I’m built for this offense.”

Here’s the latest from the NFC, shifting to Peterson’s first two NFL employers.