Alex Erickson is sticking around Cincinnati through the 2020 season. Paul Dehner Jr. of The Cincinnati Enquirer reports (via Twitter) that the Bengals have signed the wideout/returner to a two-year extension. 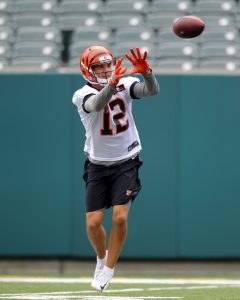 The former undrafted free agent out of Wisconsin joined the Bengals as a rookie back in 2016. He’s served mostly as a special teamer during his first two seasons in the league, returning 61 kicks (24.1-yard average) and 67 punts (7.1-yard average).

While his averages aren’t bad, the 25-year-old has compiled a dreadful 10 fumbles in two years, including seven while returning punts. Still, the Bengals continue to go back to him as a returner, as he’s slotted in as both the punt and kick returner in 2018.

Perhaps the team sees Erickson eventually working his way into an offensive role. He showed improvements last season, hauling in 12 catches for 180 yards and one touchdown. He also added another five carries for 16 yards. He’s currently listed as the fifth wideout behind A.J. Green, John Ross, Josh Malone, and Tyler Boyd.

The Bengals formally announced their undrafted free agent signings this morning, tweeting out a list of 13 new rookie additions to their roster. After splitting their draft class fairly evenly between offensive and defensive players, the Bengals’ group of UDFAs leans more toward offense, with only four defenders among them. Here’s the full list: