Damarious Randall is staying put. Meanwhile, he’ll also be changing positions. On Friday, the Seahawks announced that they have re-signed the veteran for the 2021 season. They also disclosed that he’ll be utilized as a cornerback, rather than safety.

Randall has moved around the secondary throughout his career. A safety at Arizona State, the Packers played Randall at cornerback. Then, after three years, he was traded to the Browns, where he was moved over to safety. That’s where the Seahawks kept him last year — Randall saw time in ten games off the bench last year. He was mostly used on special teams but, when he was on D, he was deployed as a free safety.

It’s a logical move by the Seahawks, who have lost Shaquill Griffin and Quinton Dunbar to free agency. Now, Randall will be penciled in as a CB along with D.J. Reed, Tre Flowers, and one-time rival Ahkello Witherspoon. The Seahawks could still shop for corners in the draft and free agency, but Randall’s shift may rule out a reunion with old pal Richard Sherman.

Mychal Kendricks will be on track to play a ninth NFL season. The Seahawks will provide another opportunity, signing the veteran linebacker to their practice squad.

Kendricks will take the place of Damarious Randall, whom the Seahawks promoted to their active roster Wednesday. The Seahawks hosted Kendricks on a visit earlier this month. He will join a practice squad that now has two high-profile players, with Damon Harrison still part of that 16-man unit (despite poaching attempts from two Florida teams).

This will be a third season for the Kendricks-Seahawks partnership. The former Eagles starter landed with the Seahawks in 2018, shortly after the Browns released him when his insider trading scandal surfaced. But sentencing in that case has been delayed many times over the past two years, with the pandemic tabling it again in 2020. Kendricks has also recovered from the torn ACL he suffered in December, prompting the Raiders to take a look. But Kendricks will return to Seattle.

The Seahawks used Kendricks as a starter in 14 games last season, playing him extensively alongside Bobby Wagner and K.J. Wright in base sets. Kendricks, 30, made 71 tackles (eight for loss) and recorded three sacks. His extensive usage last season points to a near-future promotion from Seattle’s taxi squad.

As could be expected given the circumstances, the Seahawks are promoting Damarious Randall from their practice squad.

The Seahawks signed the former first-round pick earlier this week. Randall will likely play a key role Sunday against the Dolphins. Neither Jamal Adams nor Quinton Dunbar practiced this week. Both are out for Seattle’s Week 4 contest.

Randall could not make the Raiders’ 53-man roster this year, after signing a one-year deal, but brings 65 games’ and 56 starts’ worth of experience to the Seahawks’ depleted secondary. After being used at cornerback for three season in Green Bay, Randall started 26 games at safety with Cleveland over the past two seasons.

Seattle will also elevate linebacker Shaquem Griffin and cornerback Gavin Heslop from its practice squad. Beginning his season on the Seahawks’ practice squad, Griffin played in Seattle’s shootout win over Dallas last weekend. The third-year linebacker was active for each of the Seahawks’ 32 regular-season games from 2018-19.

Seahawks To Meet With Damarious Randall

The Seahawks will host safety Damarious Randall on a visit this week, sources tell NFL.com’s Mike Garafolo (on Twitter). Randall could help to fill the void in Seattle’s secondary as they deal with multiple injuries. 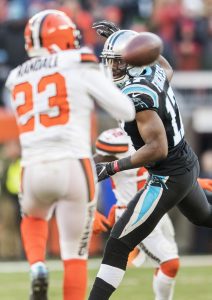 Randall was dropped by the Raiders just prior to their season opener, even though they’re still on the hook for his $1.5MM in guaranteed base salary. That sum will be offset by any deal Randall signs this year, so the veteran could be willing to settle for the minimum.

Randall, 28, spent the first three years of his career with the Packers before moving on to the Browns in 2018. Last year, he was limited to just eleven games, though he still managed 2.5 sacks, 61 total stops, and six passes defensed. All in all, he’s got 56 career starts and 14 interceptions to his credit across five NFL seasons.

The Seahawks were among the clubs to express interest in Randall back in March. Now, they’re interested once again as their secondary has failed to keep a lid on things through three games. In fact, they’ve set a record — the Seahawks have allowed a combined 1,292 passing yards to the Falcons, Patriots, and Cowboys, an all-time high for any NFL club through the first three weeks of the season.

Fortunately for them, the offense has been able to keep up. The Seahawks are 0-3 heading into their Week 4 matchup against the Dolphins.

The Raiders are releasing safety Damarious Randall, as Mike Garafolo of NFL.com tweets. The Raiders are still on the hook for the veteran’s $1.5MM guaranteed base salary, though that will be offset by the salary paid to Randall by his new team.

Randall, 28, spent the first three years of his career with the Packers before moving on to the Browns in 2018. Last year, he was limited to just eleven games, though he still managed 2.5 sacks, 61 total stops, and six passes defensed. All in all, he’s got 56 career starts and 14 interceptions to his credit across five NFL seasons. The Raiders inked him to a one-year deal worth up to $3.25MM in early April, but they’ve decided to go in a different direction.

The Washington Football Team and the Seahawks also expressed interest in Randall in March. Those teams may or may not circle back to him, but it stands to reason that he’ll find work somewhere. The Raiders’ secondary, meanwhile, will work to improve their work against the pass. Last year, they surrendered 256.7 passing yards per game, the eighth-highest total in the league.

Damarious Randall is headed to Las Vegas. On Friday, the safety agreed to a one-year deal to join up with Jon Gruden & Co., according to ESPN.com’s Josina Anderson (Twitter link). Ian Rapoport of NFL.com adds that the pact will be worth up to $3.25MM (Twitter link).

Randall, 28 in August, spent the first three years of his career with the Packers before moving on to the Browns in 2018. Last year, he was limited to just eleven games, though he still managed 2.5 sacks, 61 total stops, and six passes defensed. All in all, he’s got 56 career starts and 14 interceptions to his credit across five NFL seasons.

Randall clashed with head coach Freddie Kitchens at times last year, but he wasn’t the only player in Cleveland to get into it with the since-fired coach. Besides, Gruden likes to see a little bit of fire in his veteran players.

The Redskins and Seahawks also expressed interest in Randall in March, but the Raiders stayed patient and landed him on a short-term deal in April. Luckily for them, Randall was still available to help fortify the secondary after their deal with Eli Apple fell through.

One way or another, the Raiders will have to improve their pass defense in order to contend in 2020. Last year, they surrendered 256.7 passing yards per game, the eighth-highest total in the league.

Damarious Randall views the Raiders, Redskins, and Seahawks as the most compelling suitors for his services, ESPN.com’s Josina Anderson (on Twitter) hears. The Browns safety is set to reach free agency on Wednesday and is currently in talks with teams as the “legal tampering” period gets underway.

Randall, 28 in August, was limited to just eleven games last year. Still, he notched 2.5 sacks – the first sacks of his pro career – while logging 61 total tackles and six passes defensed. Over the course of five years with the Packers and Browns, he’s appeared in 65 games with 56 starts and come away with 14 interceptions in that span.

For what it’s worth, Randall clashed with head coach Freddie Kitchens at times in 2019. However, he was far from the only player to butt heads with Kitchens, who has since been fired and replaced with Kevin Stefanski.

Prior to the now-infamous conclusion to this season’s first Browns-Steelers game, Damarious Randall was ejected for delivering a helmet-to-helmet hit. Although Randall was not suspended, he will join Myles Garrett in missing the Pittsburgh leg of this series.

The Browns will make Randall a healthy scratch, having departed for Pennsylvania without the starting safety, according to a team announcement. Freddie Kitchens‘ choice to leave Randall in Cleveland instead stems from an unknown incident that occurred this week, Mary Kay Cabot of the Cleveland Plain Dealer reports.

Randall was ejected after a hit on Diontae Johnson resulted in the Steelers rookie suffering a concussion. Randall played against the Dolphins last week, doing after saying he’d received death threats because of his hit on Johnson. The former Packers defender has started 22 games since being traded to the Browns in 2018. He’s made seven starts this season, missing four games due to injury.

Cleveland has already lost its other starting safety, Morgan Burnett, for the season. The team has consistently had to play backups in the secondary this season, due to injuries and now a surprise scratch.