The Falcons were interested in trading up during Round 1 for Alabama defensive tackle Da’Ron Payne, per Tony Pauline of DraftAnalyst.com. However, the Redskins taking him at No. 13 made the Falcons change their plan. They stood pat and drafted Payne Crimson Tide teammate Calvin Ridley, doing so despite having Julio Jones and Mohamed Sanu in the fold. Pauline notes the Falcons passed on Florida defensive tackle Taven Bryan — the Jaguars’ pick at No. 29 — because they weren’t particularly enamored with the former Gator’s game. Atlanta has Grady Jarrett and Jack Crawford stationed in the middle of its defensive front, and the team used a third-round pick to help out at this spot in taking South Florida interior defender Deadrin Senat.

Here’s the latest from the NFC South:

The Redskins have signed first-round pick Da’Ron Payne, according to Field Yates of ESPN.com (on Twitter). The defensive tackle has become the first Round 1 pick from the 2018 NFL Draft to ink his rookie deal. 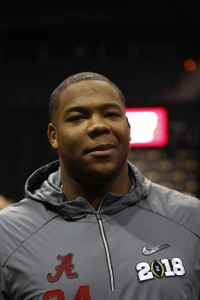 Payne, an Alabama product, vaulted up the draft boards this year thanks to his run-stuffing ability. The Redskins pounced on him at No. 13 overall with the belief that he can also develop into a strong defender on passing downs.

“I think [fellow Alabama alum] A’Shawn Robinson was more talented than Da’Ron and I know Robinson had better (tackle-for-loss) and sack production than him, but Payne plays harder and I think he’ll be the better NFL player,” one NFC executive told NFL.com prior to the draft. “He’s thick and strong, but he’s also a really good athlete and I see his best football in front of him.”

Last year, Payne had 53 total tackles, a sack, and an interception as Alabama captured yet another National Championship.

Running back Derrius Guice visited the Redskins at their team facility on Monday, a source tells John Keim of ESPN.com (on Twitter). The Redskins have been public about their desire to add a pass-catching running back and Guice, with 18 catches last year at LSU, would fit the bill.

With needs to address on the other side of the ball, many believe that the Redskins will take a defensive player at No. 13 overall. However, the Redskins could probably trade back into the early 20s to take Guice and address their defensive holes later on.

Here’s the latest round of NFL draft news:

The 2018 draft class is considered to be one of the deepest in recent memory with respect to quarterback talent, and the quarterbacks are understandably dominating draft-related stories. But there are plenty of other collegiate players with the potential to dominate at the next level, so let’s round up a few non-QB draft notes:

Florida State safety Derwin James spent Wednesday meeting with the Buccaneers and will sit down with the Packers on Thursday, according to Ian Rapoport of NFL.com (on Twitter). James, the No. 9 ranked safety in the draft per NFL.com’s Daniel Jeremiah, offers versatility with experience at both safety spots, nickel cornerback, and even outside linebacker. He arguably performs better when playing closer to the line, so the team that drafts him will likely look to continue using him in multiple roles.

Minkah Fitzpatrick isn’t the only Alabama underclassman going pro. Defensive tackle Da’Ron Payne and safety Ronnie Harrison announced this week that they will also skip their senior seasons in order to enter the 2018 NFL Draft. 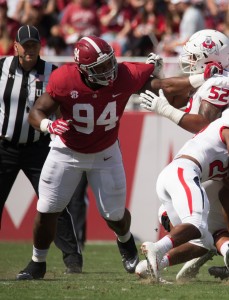 Payne is leaving on the highest note possible after being named the defensive MVP of the Sugar Bowl and the National Championship game. His raw physical skills should vault him into the first round in April.

Harrison recently received a second-round grade from the NFL’s College Advisory Committee. That’s no surprise after he racked up three interceptions and was named first-team AP All-SEC in 2017. Harrison also led Alabama with 74 tackles on the season.

Running back Bo Scarbrough is also entering the draft, but where he goes is anyone’s guess. Scarbrough split carries with Josh Jacobs and Najee Harris this past season, leaving him with a smaller share of the workload than anticipated. With solid workouts and some big games in his past (like 2016’s 180-yard showing against Washington), Scarbrough is hoping to put himself in the late-round conversation.