Chris Lacy is set to make his NFL debut. Dave Birkett of the Detroit Free Press reports (via Twitter) that the wide receiver will be promoted to the Lions active roster. A corresponding roster move hasn’t been reported. 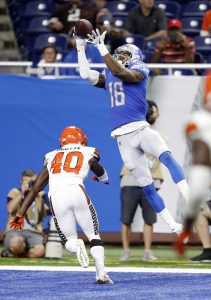 After finishing his senior season with 20 receptions for 264 yards, Lacy went undrafted out of Oklahoma State during this past year’s draft. The six-foot-three, 205-pound wideout caught on with the Patriots after the draft, but he was waived by New England less than a week later.

He was subsequently claimed by the Lions, and he proceed to have a solid preseason for Detroit. He appeared in all four games, hauling in three receptions for 17 yards and one touchdown. He was waived after the preseason and signed with the Lions practice squad, where he’s spent the entire 2018 season.

The 22-year-old could get some run this weekend against the Vikings, especially since Bruce Ellington will be sidelined with a hamstring injury. Other than Lacy, the only other healthy wideouts currently on the Lions roster are Kenny Golladay, T.J. Jones, Andy Jones, and Brandon Powell.