Northwestern head coach Pat Fitzgerald will not leave the collegiate game for the NFL, his agent tells Tom Silverstein of the Milwaukee Journal Sentinel (Twitter link). 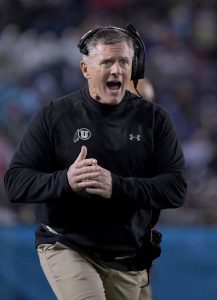 Fitzgerald has recently been adamant that he won’t leave Northwestern, but NFL clubs were still interested in his services. The Packers, for one, were expected to request an interview with Fitzgerald, and Silverstein reports Fitzgerald actually received multiple inquiries from the league. Packers president Mark Murphy hired Fitzgerald at Northwestern, but that connection wasn’t enough to sway Fitzgerald.

Fitzgerald, 44, has been mentioned as an NFL candidate since at least 2015. A former player at Northwestern, Fitzgerald began coaching the Wildcats’ defensive backs in 2001, and was eventually named head coach in 2006. He’s since transformed the program, posting a 92-70 record during his time in Evanston.

Fitzgerald inked a 10-year extension with Northwestern in 2017. His salary is not publicly available, but Fitzgerald is believed to be among the highest-paid coaches in the Big Ten.

Despite Pat Fitzgerald emphatically proclaiming he was staying at Northwestern following Monday night’s Holiday Bowl win, the Packers are still going to make an attempt to interview him, Tom Silverstein and Jim Owczarski of the Milwaukee Journal Sentinel report. The Packers were expected to reach out with an interview request, with GM Brian Gutekunst expressing great admiration for the Northwestern coach and Packers president Mark Murphy having hired Fitzgerald when he was at Northwestern, but nothing has transpired yet. The 13-year Wildcats leader said Northwestern was “not going anywhere” and Chicago was “home forever.” Mike McCarthy made more than $8MM last season, according to Silverstein and Owczarski, who suspect the Packers may have to offer at least that — despite Fitzgerald having never coached in the NFL — to entice the 44-year-old college coach. The Packers have thus far requested interviews with Josh McDaniels, Mike Munchak, Dan Campbell, Matt LaFleur and Brian Flores.

Here is the latest from the coaching front on New Year’s Day:

Only two days until Black Monday and the coaching carousel is in full swing, with rumors flying left and right. The Packers have already fired head coach Mike McCarthy, but some of his assistants status’ are still up in the air. At least one significant change is coming, as one of the Packers’ longtime trainers, Pepper Burruss, is retiring, notes Rob Demovsky of ESPN (Twitter link). Burruss was with the team for 22 years. 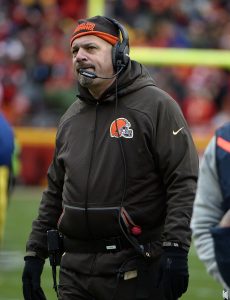 Demovsky also notes in a separate tweet that defensive coordinator Mike Pettine is unsure whether he’s being retained, but that as of now he’s planning on his usual after the season work. Meanwhile, Tom Silverstein of the Milwaukee Journal Sentinel tweets that Pettine wants to be back, but that he’ll likely be let go if the Packers hire a defensive minded coach.

It all suggests Pettine has a chance to be back, which might be a surprise to some, but he’s highly respected within the building. Holdovers from fired coaches’ staffs aren’t that common, but they aren’t unheard of either. Jim Bob Cooter was retained as the Lions’ offensive coordinator after Jim Caldwell was fired last year, and there’s plenty of precedent. While the Packers have mostly been linked to offensive minded coaches to pair with Aaron Rodgers, they’ve been rumored to be interested in at least one defensive guru, Pat Fitzgerald.

The team does indeed plan to pursue the Northwestern coach for their head coaching vacancy, sources told Ian Rapoport of NFL.com. Rapsheet notes that Fitzgerald “has shut down countless interview requests from the NFL in the past”, but the chance to coach a team like the Packers and Rodgers may change his mind.

Rapoport also writes that while interim coach Joe Philbin will receive an interview from team president Mark Murphy and GM Brian Gutekunst, “it would be a surprise if he received the full-time job.” Instead, the team is expected to “conduct a wide-ranging search with perhaps 10-12 candidates.” Patriots offensive coordinator Josh McDaniels is another name that has come up frequently, and the team has already interviewed Chuck Pagano and Caldwell.

It’s the time of year where the coaching carousel is about to be in full swing, and there are a ton of rumors floating around. While there are a slew of coaches who are near locks to be fired come next Monday, the biggest stories of the week have been about two coaches who are staying put, John Harbaugh and Pete Carroll. The Ravens suddenly announced Harbaugh would be back in 2019 after there was a ton of speculation that he’d be fired if Baltimore missed the playoffs. While the team announced in their statement they were going to try to work on an extension and all appeared to be well and good, his long term future with the team is apparently very much still in doubt.

There’s a “real chance” that Harbaugh opts not to sign any extension from the Ravens, notes Peter King of NBC Sports. King writes Harbaugh may “coach his final season and take his chance on the market in 2020.” Harbaugh was expected to be pursued by several teams if he was let go by the Ravens, and would likely have his pick of at least a few jobs if he decides to go that route in 2020. For what it’s worth Harbaugh didn’t sound particularly excited after the Ravens announced he’d be back in 2019, calling the news a “non-story”, according to Jamison Hensley of ESPN (Twitter link). Coaches very rarely willingly switch teams, but it sounds like Harbaugh could be an exception.

Here’s more from the coaching ranks as we barrel toward Week 17:

It won’t be this year or the next, but at some point before he calls it quits on a likely Hall of Fame career, cornerback Richard Sherman is likely to make the move to safety, the San Francisco Chronicle’s Eric Branch writes.

The four-time First Team All-Pro selection is open to it at least, saying:

In the first of a three-year deal with the 49ers, Sherman still rates as an above average cornerback according to Pro Football Focus. Now in his 30s, however, the star defender is already looking to make a similar move that prolonged the careers of Charles Woodson, Rod Woodson and Aeneas Williams. Despite the move, don’t expect him to play into his late 30s.

On top of that, Breer has even more news. Here are the highlights:

With Black Monday – the day following the conclusion of the regular season when a number of NFL head coaches will inevitably lose their jobs – about a week away, clubs will soon take a circumspect look at the available candidates. Many of those replacement options will come from the NFL ranks, but college coaches will naturally engender interest, as well. Two such NCAA coaches, per Jason La Canfora of CBSSports.com, are Jim Mora of UCLA and Pat Fitzgerald of Northwestern.

Mora, 54, spent 2004-06 as head coach of the Falcons, earning a postseason berth during his first season; he was also the Seahawks’ head coach during a forgettable 2009 season. He’s been much more successful during his NCAA time, posting a 37-16 record in Los Angeles. Per La Canfora, More might not be too eager to make the jump to the NFL, as he has long-term job security and one of the top collegiate rosters at UCLA. But the Chargers job, if open, would be particularly appealing to Mora, as he’d be able to stay on the West Coast while leading a team with a franchise quarterback in Philip Rivers.

The 41-year-old Fitzgerald has been garnering NFL interest for years, per La Canfora, as clubs are impressed that Northwestern has been able to stay competitive in the Big 10 despite lacking top-end talent. NFL teams are even more impressed this season, says La Canfora, and search firms are actively testing Fitzgerald’s level of intrigue in leaping to the NFL. One possible roadblock? Fitzgerald might be reticent to leave the greater Chicago area (and the Bears job isn’t likely to open up any time soon).

The Titans and Dolphins will certainly be searching for new head coaches this offseason, while the Rams, Browns, Giants, 49ers, Lions, and Saints could also be in the hunt.