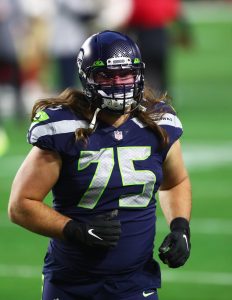 Ugly details from Wheeler’s alleged assault have surfaced, and the 27-year-old lineman announced (on Twitter) he will leave football. Wheeler was due for restricted free agency in March.

Wheeler was booked into the King County (Wash.) Correctional Facility early Saturday morning. The Kent Police Department responded to a call from a woman who said she believed she was “being killed,” according to a police report obtained by the Seattle Times. The woman suffered a dislocated arm and was bleeding when police arrived. Wheeler was standing beside the alleged victim when authorities arrived, according to the report.

This horrifying incident reportedly began when Wheeler asked the woman to “bow to him,” and when she did not, he threw her on a bed. The report indicates Wheeler strangled the woman until she lost consciousness. After regaining consciousness and running into a bathroom, the woman called 911. The report added that Wheeler was on medication for bipolar disorder but that he had not taken the medication recently.

Wheeler started 14 games at right tackle for the Giants in 2018. After the Giants cut the former undrafted free agent in September 2019, Wheeler signed with the Seahawks. He played in five games with Seattle this season.

Jan. 8: The Seahawks have placed Kendricks, who will require knee surgery, on IR, per head coach Pete Carroll. The team will promote OT Chad Wheeler from the practice squad to take Kendricks’ place on the roster.

Dec. 30: If you were watching the thrilling Seahawks-49ers bout last night, you saw Seattle linebacker Mychal Kendricks in obvious pain after making a tackle along the sidelines in the third quarter. Per Ian Rapoport of NFL.com, Kendricks is believed to have suffered a torn ACL, which would obviously rule him out of the Seahawks’ playoff run (Twitter link).

It’s a tough blow for Seattle, as Kendricks started all 14 games in which he appeared this season and is an important piece of the team’s front seven. Kendricks has compiled 71 tackles, three sacks, four passes defensed, and an interception in 2019.

Of course, this could be last we hear of Kendricks for awhile. He pleaded guilty to insider trading in September 2018, and while his sentencing date has been postponed five times, he is currently scheduled to be sentenced in February 2020.

The Seahawks will travel to Philadelphia to battle the NFC East champion Eagles on wildcard weekend, which is about as favorable of a draw as they could have hoped for. Both teams are far from healthy, but the Eagles have dealt with a historic number of injuries for a playoff squad, so Seattle will have a good chance to advance to the divisional round and perhaps earn a rematch with the 49ers.