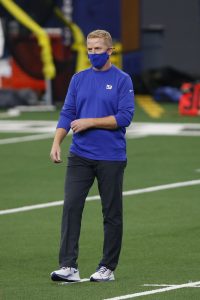 The Chargers have requested an interview with Giants offensive coordinator Jason Garrett, as Ian Rapoport of NFL.com tweets. The former Cowboys head coach would be one of several candidates to interview after the firing of Anthony Lynn. 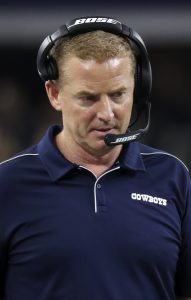 Garrett posted a regular season record of 85-67 for the Cowboys across nine seasons. Although they came up short in the playoffs, Garrett remains a highly-respected offensive mind. He also played quarterback in the league for nearly 15 years, making him a solid choice to develop youngster Justin Herbert. Of course, this past year wasn’t a banner season for the Giants, but there’s plenty of blame to go around in Northern New Jersey.

The Chargers will also look to interview Bills offensive coordinator Brian Daboll, according to NFL.com’s Tom Pelissero (on Twitter). Daboll is also being targeted by the Jets, who got an up-close look at Josh Allen‘s transformation in 2020.

So far, the Chargers have put at least three candidates on their HC list in Garrett, Daboll, and Titans offensive coordinator Arthur Smith. It’s worth noting that the competition for Smith will be fierce — all six teams with openings have asked to meet with the 38-year-old.

Jason Garrett wasn’t out of a job too long. The Giants are planning to hire Garrett as their new offensive coordinator, a source told Ed Werder of ESPN.com (Twitter link). 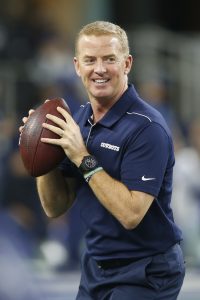 Garrett staying in the division and getting to face the Cowboys twice a year will provide a lot of drama and entertainment, if nothing else. Garrett met with Giants brass a couple of days ago, and apparently everything went well. He caught a lot of flak his last few years in Dallas, but he will be a solid veteran presence to lean on for rookie head coach Joe Judge in New York.

Garrett, who played quarterback in the league for nearly 15 years, will now be tasked with helping to develop Daniel Jones. He spent four years with the Giants as a backup, so this is a homecoming of sorts for him. He’ll surely be excited about the opportunity to take on Jerry Jones and his old team. He started his coaching career as the quarterbacks coach with the Dolphins for a couple of years before moving on to Dallas.

Garrett went a perfect 6-0 against the Giants the past three years, which couldn’t have hurt his cause with New York’s ownership. He was the offensive coordinator for the Cowboys for four seasons before serving as head coach for the past nine. Still only 53, the 2016 NFL Coach of the Year surely has his sights set on becoming a head coach again sometime in the near future. If he can get Jones to take the next step and develop like Dak Prescott did, that opportunity could come relatively soon.

The Giants are entering a new era of football, as they finally appear set to move on from Eli Manning. They fired Pat Shurmur after the season ended and brought in Judge, the Patriots’ receivers/special teams coach, to replace him. Judge’s staff is starting to fill out, as he already hired away defensive coordinator Patrick Graham from the Dolphins. We heard earlier today the Giants were planning on speaking with Scott Linehan, who worked under Garrett as his OC in Dallas. A reunion could be in the works there.

Former Cowboys head coach Jason Garrett could land with his longtime rival. On Wednesday, Garrett met with Giants brass to interview for the vacant offensive coordinator position, according to Mike Garafolo of NFL.com (on Twitter). 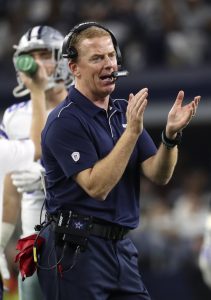 Garrett could provide the Giants with tons of offensive knowhow, plus years of coaching experience to support first-time head coach Joe Judge. Garrett also helped to groom Day 3 pick Dak Prescott into one of the league’s best quarterbacks, so the Giants are undoubtedly interested to hear about what he could do for youngster Daniel Jones.

On the flipside – Garrett has long been accustomed to running his own show, and it’s unlikely that he would see an OC role as his final stop. The Giants may, or may not, be wary of hiring a coordinator who will surely be in the head coaching mix this time next year.

Although Garrett’s Cowboys disappointed in 2019, he had his fair share of accomplishments in Dallas, including a 6-0 record against the G-Men over the last three seasons. All in all, Garrett coached the Cowboys to an 85-67 record since taking over as HC midway through the 2010 season.

The Giants requested to interview Garrett for their head coaching position earlier this month, but that meeting was 86’d when they hired Judge. Garrett also has history with the franchise, having played for them as a backup quarterback between 2000 and 2003.

Mike McCarthy being hired so soon points to the Cowboys being confident he will coax more from their talented roster than Jason Garrett did, and ownership looks set to give its new HC more power. McCarthy will not only have greater input on roster decisions than he did in Green Bay but will hold as much influence in this area as Bill Parcells did three coaches ago in Dallas, according to Michael Gehlken of the Dallas Morning News and Ed Werder of ESPN.com (Twitter links). It was not a secret McCarthy and ex-Packers GM Ted Thompson did not see eye to eye on the latter’s aversion to free agency additions, so it will be interesting to see how the Cowboys proceed now that McCarthy will possess greater influence than Jason Garrett or Wade Phillips did on this front.

Here is the latest from Dallas and other NFC East cities:

3:11pm: Hold the phone. The Giants have not requested permission to speak to Garrett about their OC job, Ralph Vacchiano of SNY (on Twitter) hears. Their request was for their head coaching job, before they agreed to hire Joe Judge.

As the HC, Judge will get to pick his own staff. It’s not clear whether he would consider Garrett for the OC job, or if the ex-Cowboys head coach would be interested in the position.

10:50am: The Giants’ head coaching job is spoken for, but the team still wants to meet with former Cowboys head coach Jason Garrett. The Giants are interested in Garrett as a candidate for the offensive coordinator role on Joe Judge‘s staff, Ed Werder of ESPN.com (on Twitter) hears.

Judge, 38, lacks head coaching experience, and Garrett could provide some helpful counsel to him. Garrett, of course, spent a decade as the Cowboys’ HC.

It’s not clear whether Garrett is willing to consider coordinator positions, though the Giants job would have some obvious upside. Garrett could groom quarterback Daniel Jones, who showed promise as a rookie despite still being green. The Giants OC job would also give him a chance to face his old friends twice per season.

The Browns stand as the last head coaching vacancy in the league and, so far, they haven’t shown any real interest in Garrett.

The Giants have requested permission to speak with former Cowboys coach Jason Garrett, sources tell Ian Rapoport and Mike Garafolo of NFL.com (on Twitter). Garrett, of course, will not return to the Cowboys, but permission is required since he is technically under contract until January 14. 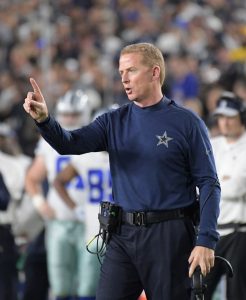 On Tuesday morning, the Giants lost out on top target Matt Rhule. The former Baylor head coach agreed to terms with the Panthers moments before his scheduled flight to New York, forcing the Giants to shift to backup options, including Garrett.

Although Garrett’s Cowboys disappointed in 2019, he had his fair share of accomplishments in Dallas, including a 6-0 record against the G-Men over the last three seasons. All in all, Garrett coached the Cowboys to an 85-67 record since taking over as HC midway through the 2010 season.