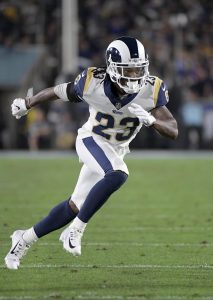 The Lions will look into a veteran cornerback Monday. They are set to work out Nickell Robey-Coleman, according to veteran NFL reporter Josina Anderson (on Twitter). Despite the calendar having flipped to August, this marks the first piece of Robey-Coleman news since he became a free agent in March. 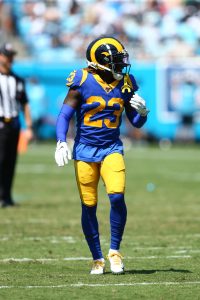 Although Robey-Coleman played the 2020 season with the Eagles, his most prominent NFL work came in Los Angeles. The 29-year-old defender has ties to both Lions GM Brad Holmes and assistant GM Ray Agnew, with each being with the Rams throughout Robey-Coleman’s time with the team. Robey-Coleman spent three seasons with the Rams, playing in L.A. from 2017-19.

The new Lions HC and DC — Dan Campbell and Aaron Glenn — were on the other end of Robey-Coleman’s defining play, his controversial collision with Tommylee Lewis near the end of the 2018 NFC championship game. The ex-Saints staffers will obviously not let that stop their new team from taking a look at the veteran slot defender. Robey-Coleman has eight years’ experience. If signed, he would join ex-Rams teammates Jared Goff and Michael Brockers in Detroit.

Robey-Coleman has been one of the league’s better slot defenders over the past several years, bouncing from Buffalo to L.A. to Philly. Pro Football Focus viewed the Rams’ version of Robey-Coleman as a high-end cover man, ranking him as a top-20 corner from 2017-19. PFF slotted him outside the top 80 during his one Eagles season, however. Robey-Coleman allowed a 78.8% completion percentage on passes thrown his way in 2020 — well north of his Rams marks.

The Lions have changed up their corner group considerably this offseason, cutting both Desmond Trufant and slot man Justin Coleman after injury-marred seasons. They signed Quinton Dunbar and drafted Ifeatu Melifonwu in the third round.

Catching up on the minor moves from the past day or so:

The Eagles’ have agreed to sign cornerback Nickell Robey-Coleman, as Josina Anderson of ESPN.com tweets. Robey-Coleman will join on a one-year deal (financial terms not yet disclosed).

The Rams declined Robey-Coleman’s option in March, allowing him to hit the open market. He’s found work in Philly, and he’ll join a revamped Eagles secondary that looks pretty darn good on paper.

New pickup Darius Slay will star as the team’s primary outside corner while Rasul Douglas, Sidney Jones, and Avonte Maddox are set to jockey for the CB2 spot. In the middle, safeties Jalen Mills and Rodney McLeod will be on patrol, with Robey-Coleman handling the slot. It remains to be seen whether his former Buffalo teammate, Ronald Darby, will be brought back for another year.

Robey-Coleman was set to count for a $4.5MM cap hit before the Rams turned him loose. Last year, he appeared in 16 games and played on 64% of their snaps. Before he joined LA in 2017, he spent the first four years of his career with the Bills and built a reputation as one of the league’s better slot men.

Another cornerback is hitting the market. The Rams have informed Nickell Robey-Coleman that they won’t pick up his option and he’ll become an unrestricted free agent, according to Gary Klein of the Los Angeles Times (Twitter link). 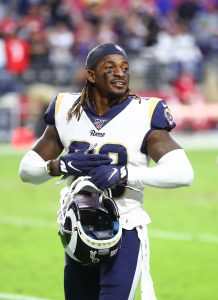 Robey-Coleman would’ve had a $4.5MM cap hit had the Rams picked up his option. Los Angeles has been shedding defenders left and right in free agency, as starters Michael Brockers and Cory Littleton both just landed big contracts from other teams. Eric Weddle also retired, so the defense is going to look quite a bit different in 2020. The Rams traded away cornerbacks Marcus Peters and Aqib Talib midway through last season, so their current unit is virtually unrecognizable from the one we saw at the beginning of last year.

Robey-Coleman appeared in all 16 games and while he only started three, he played about 64 percent of the defensive snaps, so this is a significant move. The Rams have Jalen Ramsey at corner now, but not a whole lot after him. Troy Hill is still under contract, and last year’s third-round pick David Long will likely be counted on to play a bigger role assuming they don’t make any more moves.

Originally an undrafted free agent out of USC in 2013, Robey-Coleman signed a three-year, $15.75MM deal with the Rams back in 2018 that included an option for the 2020 season. Primarily a slot corner, Robey-Coleman is perhaps most well known for being the defender on the infamous pass interference non-call in the Rams’ NFC Championship Game win over the Saints two seasons ago. He should generate significant interest from teams looking for someone to man the slot.