Alex Armah is switching NFC South teams. The free agent fullback in signing with the Saints, according to NFL.com’s Tom Pelissero (via Twitter).

The 26-year-old had spent his entire four-year career in Carolina, and he didn’t miss a game between the 2018 and 2020 seasons. During his four years with the Panthers, Armah ultimately compiled 64 yards from scrimmage and three touchdowns.

The former sixth-rounder also has plenty of experience on special teams, appearing in 868 special teams snaps through his four seasons in the NFL. Armah has five career tackles.

In New Orleans, Armah will be protecting a running back grouping that includes Alvin Kamara, Latavius Murray, and Ty Montgomery.

It’s official – the Panthers have placed tight end Greg Olsen on injured reserve. This was viewed as the most likely scenario after Olsen broke his foot over the weekend. 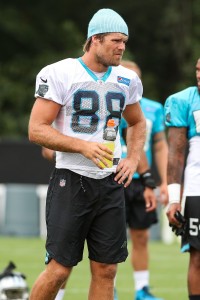 “The only thing that he has to do now is heal,” trainer Ryan Vermillion said in a statement released by the team. “I know Greg will be around and he’ll be involved. He’s a team guy. He’ll try to do everything he can to help this team continue to win.”

Of course, the NFL’s modified IR rules will allow for Olsen to return later this year. Teams are permitted to bring two players back from IR each season, provided that the player misses eight weeks of games. If Olsen recovers quickly, he could be ready to resume football activities in six weeks, so he’ll have time to get ready before a potential return in November.

The Panthers will miss Olsen, particularly after they managed only nine points in their Week 2 win over the Bills. Through two games, the Panthers have averaged 174.5 yards through the air, putting them in the bottom third of the league.

Last year, Olsen had 80 catches for 1,072 yards and three touchdowns. It was his third consecutive season with 1,000 yards or more.

To take Olsen’s place, the Panthers will promote fullback Alex Armah from the practice squad.

The Panthers have signed their entire 2017 draft class. One day after inking first-round selection Christian McCaffrey, all seven Carolina draft picks are now officially in the fold:

Elder and Butker were the last to agree, but they put pen to paper after Friday morning’s rookie camp session. As shown in PFR’s team-by-team draft breakdown, the Panthers are the first team to sign their entire draft class.

According to Lance Zierlein of NFL.com, Samuel’s game is reminiscent of Oregon product Josh Huff. Opinions are split on how this well-rounded receiver’s game will translate as a pro.

“It’s kind of like with Jalin Marshall last year,” a regional scout told Zierlein. “How do you use him? He’s not a running back and his routes and hands really aren’t that good. Marshall went undrafted. Samuel is a better athlete but they are about the same size and give you the same concerns with how to use them.”

According to Albert Breer of The MMQB (Twitter link), there is offset language in McCaffrey’s deal.

The Panthers are now the first club to reach a deal with a 2017 first-round pick, as the club announced it has signed running back Christian McCaffrey. Carolina has also inked second-round offensive lineman Taylor Moton and sixth-round fullback Alex Armah.

McCaffrey, the eighth overall pick in last week’s draft, should immediately factor into a Panthers offense that ranked 25th in DVOA last season. A running back by trade, McCaffrey may end up playing a good deal of receiver, especially with established veteran Jonathan Stewart still lurking in the backfield. McCaffrey should be in line for a four-year deal worth roughly $17.241MM (signing bonus of ~$10.679MM). Carolina will also hold a fifth-year option on McCaffrey for the 2021 campaign.

Moton, meanwhile, should compete for the Panthers’ starting right tackle job. Third-year pro Daryl Williams looks to be Moton’s primary competition, as Michael Oher is still dealing with concussion issues (and was recently cited for misdemeanor assault). Moton, a Western Michigan product, will earn $6.454MM over the life of his four-year contract.