Jarrett Stidham will likely be taking over for Tom Brady next season, and his former college coach is optimistic that the 2019 fourth-rounder will be successful.

“It definitely helped him to learn under the best and see what that looks like, but he’s the kind of young man, too, this is what he’s been waiting on,” Auburn’s Gus Malzahn told ESPN’s Mike Reiss. “I’ll tell you, the moment won’t be too big for him. He’ll be up to the challenge, that’s what I expect.

“Even when he got here, before he played his first game, you could just kind of tell he was a mature young man. Like a gym rat, always at the complex trying to learn, study film. When he got drafted by the Patriots [in 2019], I thought it was a perfect spot for him system-wise — spreading the field. He’s so good with protections, changing protections, and scheme-wise everything that goes with it, and just the flexibility the scheme gives him. I think that really applies to his strength.”

Stidham played a pair of seasons at Auburn, including a 2017 campaign where he connected on 66.5-percent of his passes for 3,158 yards, 18 touchdowns, and six interceptions.

Here are some more notes out of New England:

The Patriots’ draft class is nearly sewn up. On Monday, the Pats signed third-round defensive end Chase Winovich, according to Field Yates of ESPN.com (on Twitter). It’s a four-year deal worth $3.83MM with a signing bonus of roughly $997K. 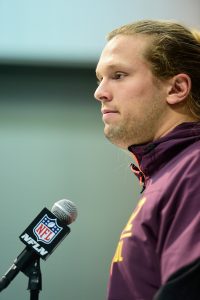 With Winovich inked, third-round running back Damien Harris stands as the Patriots’ only unsigned draft pick, as shown by PFR’s tracker:

Winovich began his career at Michigan as a tight end, but shifted to the other side of the ball for his junior season. He immediately found success, racking up five sacks and 8.5 tackles for loss in 2016. He only improved from there, notching 8.5 sacks and 19 TFL in ’17. His stat sheet wasn’t as gaudy last season, but he still managed five sacks on the year and while flashing strong technique.