The Falcons will promote practice squad quarterback Danny Etling, according to Adam Caplan of SiriusXM (on Twitter). The move is significant, because it may be an indicator that Matt Ryan won’t play on Sunday vs. the Seahawks. 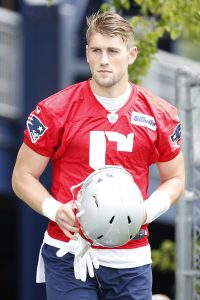 Ryan suffered an ankle injury against the Rams on Sunday and is presently listed as questionable. The Falcons haven’t said much about his status, but the promotion of Etling says a lot.

If Ryan is out, Matt Schaub will start in his stead. Meanwhile, Etling will serve as his top clipboard holder. Etling, a 2018 seventh-round pick by the Patriots, appears to be back at the QB position. Earlier this year, the Pats were experimenting with him as a wide receiver/QB hybrid.

This has been a trying year for Ryan and the Falcons. Through seven games, they’re 1-6, and appear to be in selling mode as the trade deadline approaches. Mohamed Sanu has already been jettisoned to Etling’s former club and edge rusher Vic Beasley could be the next notable to go. Teams are also interested in tight end Austin Hooper, but the Falcons seem set on keeping him for the long haul.

Danny Etling did not clear waivers after his Patriots departure. The Falcons made a successful claim and will bring in the quarterback-turned-wide receiver, Field Yates of ESPN.com tweets.

It is possible, with the Falcons losing quarterback Kurt Benkert for the season, Etling will be given a chance to show his passing skills again. He profiles as a potential developmental player behind Matt Ryan and Matt Schaub.

This could well break up the Falcons’ three-Matt quarterback room. Atlanta reacquired Matt Simms shortly after Benkert’s Hall of Fame Game injury. Simms, however, is not a developmental arm. He is now 30 and last threw a regular-season pass in 2014. Etling has never played in a regular-season game, either, but as a 2018 seventh-round pick, the Purdue/LSU product profiles as a long-game prospect.