The Buccaneers have acquired offensive tackle Jerald Hawkins from the Steelers (Twitter link via Rick Stroud of the Tampa Bay Times). In the deal, the Bucs will swap positions with the Steelers in a late round of the 2020 NFL Draft.

Pittsburgh shipped Hawkins and a 2021 seventh-round pick to Tampa Bay in exchange for a 2021 sixth-round selection, Tom Pelissero of NFL.com tweets.

The deal amounts to a low-cost way to the Bucs to fortify their front five. Hawkins, a fourth-round pick in the 2016 draft, only has five career appearances and one start under his belt. Last year, he was slated to serve as Alejandro Villanueva‘s backup, but a quad tear wiped out his entire 2018 campaign.

Hawkins likely would have been cut by the Steelers, leaving his fate up to the waiver wire. Instead, he has secured a spot for Week 1, in a warm-weather destination. That’s not a terrible outcome for the Louisiana native and LSU product.

The Steelers are expected to place reserve offensive lineman Jerald Hawkins on injured reserve after he underwent surgery to repair his torn quad, a source tells Jeremy Fowler of ESPN.com (Twitter link). 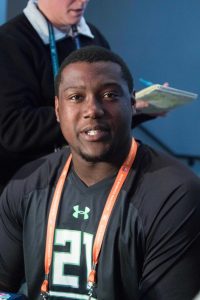 Hawkins will not be a candidate to return from injured reserve, as IR/return players must be carried through to their respective team’s 53-man roster. Given that Hawkins is landing on IR in June, he’s not eligible to come off the list later this season. A surgically-repaired torn quad can have varying recovery times, and can take anywhere from four-to-twelve months to revert to normal use.

Hawkins, a fourth-round pick in the 2016 draft, only has five career appearances and one start under his belt, but he was slated to open the 2018 campaign as Pittsburgh’s backup left tackle behind starter Alejandro Villanueva. With Hawkins sidelined, the Steelers may now turn to rookie third-rounder Chukwuma Okorafor, Matt Feiler, Jake Rodgers, or Joe Cheek as their primary swing tackle.

Given their relative lack of depth, it’s also possible the Steelers turn to the free agent market to look for a veteran tackle. Will Beatty has played that role for both the Giants and Eagles in recent seasons, while other available options include Chris Clark, Greg Robinson, and Chris Hairston.

When the Packers signed Byron Bell earlier today, most assumed it was for a reserve, depth role. But now Ryan Wood of the Green Bay Press Gazette writes that Bell may end up starting for the Packers. Wood notes that there is concern in the organization about longtime right tackle Bryan Bulaga‘s recovery from his ACL tear.

Bulaga, the Packers’ first-round pick back in 2010, tore his left ACL in week nine of last season. According to Wood, Bulaga is unlikely to be ready for week one, and there’s no real timetable for when he might be ready. Wood thinks placing Bulaga on the PUP list and holding him out at least the first six weeks of the season is a real possibility.

The good news for the Packers is that Bell has plenty of starting experience. He’s started 74 games since entering the league as an undrafted free agent in 2011. There was some talk earlier this offseason that the team could move on from Bulaga after he refused to take a pay cut, but the Packers seem committed to his return for now.

The latest out of the NFC:

The Titans, who hold the top pick in this year’s draft, have scheduled a visit with Florida State defensive back Jalen Ramsey, writes Chase Goodbread of NFL.com. Most expect the Titans to take Ole Miss offensive tackle Laremy Tunsil first overall, but they’re nonetheless doing their homework on Ramsey. Should Ramsey get past the Titans, he’ll have a potential suitor in the Cowboys, who pick fourth and have already met with him, tweets Rand Getlin of NFL.com.

LSU offensive lineman Jerald Hawkins has announced that he will enter the 2016 NFL Draft, as Scott Ferrell of the Shreveport Times writes. The 6-foot-6, 305-pound junior is projected by some to go as high as the first round. 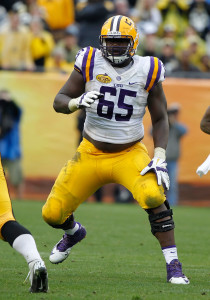 “After much thought and prayer with my family, I have decided to bypass my final year of eligibility and pursue a career in the NFL,” Hawkins announced on Instagram (Twitter link). “These years at LSU have been nothing short of amazing, but I feel I am ready for the next stage in my athletic career.”

The deadline for underclassmen to declare is January 18th, but Hawkins did not need to take things up until the eleventh hour. After a strong junior season, many expected that Hawkins would pursue his dream of playing in the NFL rather than return for a final year at LSU. With raw power, a big frame, and a wingspan large enough to make any boxer jealous, Hawkins soared when he was moved from right tackle over to the left side.