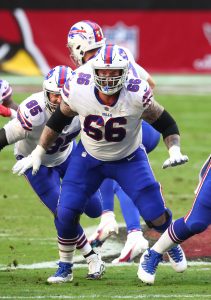 Winters joined the Bills last year after a number of seasons as the Jets’ starting right guard. In Buffalo, he played in all 16 games, including nine starts at RG. Now, he’s ticketed for a competition with incumbent Justin Murray and 2020 third-round pick Josh Jones.

The Cardinals have reshaped their offensive line in recent days by trading for Pro Bowl center Rodney Hudson. They’ve also re-upped right tackle Kelvin Beachum in an effort to give Kyler Murray better protection up front. There’s still plenty of time to go between now and the start of the 2021 season, but the Cards’ starting OL currently projects to include D.J. Humphries at left tackle, Justin Pugh at left guard, Hudson at center, Winters at right guard, and Kelvin Beachum at right tackle.

The Cardinals have agreed to sign guard Max Garcia, according to Aaron Wilson of the Houston Chronicle (on Twitter). Garcia, 27, spent the previous four years with the Broncos.

Last year, Garcia’s season was cut short in November by a torn ACL. It was a bad blow to a Broncos O-Line that already had lost guard Ronald Leary to an Achilles tear and center Matt Paradis to a broken fibula.

Garcia was a Broncos fourth-round pick in the 2015 draft. Although he started 32 consecutive games from 201-17, Garcia wasn’t a deployed as a starter in 2018 until after Leary got hurt. Indeed, Garcia didn’t play a single offensive snap until Week 6, but he was on the field for every play between Leary’s injury and his own.

Garcia’s 242 snaps were not enough to qualify for Pro Football Focus’ rankings, but he drew a favorable score in 2016 when he started in every game for Denver.