It’s official. Doctors have confirmed that Giants linebacker Ryan Connelly is done for the year after suffering a torn ACL. 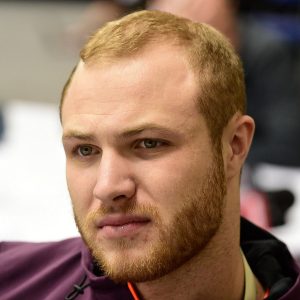 The Giants will place Connelly on injured reserve, which will formally end his 2019 campaign and open up another spot on the 53-man roster. It’s a bad blow for the G-Men, who also have fellow ‘backers Alec Ogletree and Tae Davis dealing with injuries.

Connelly, a fifth-round pick in this year’s draft, notched his first career interception against the Bucs in the club’s Week 3 victory and doubled up with another pick against the Redskins on Sunday. He seemed ticketed for more big moments in the final 12 games of the season – instead, his rookie campaign will end after four games, 20 total tackles, two tackles for a loss, and one sack.

The Giants are riding high behind the play of rookie Daniel Jones, who has taken over for Eli Manning and has the club at 2-2. However, their two-game winning streak is now in jeopardy thanks to injuries to Connelly and other key defenders. They’ll try their luck against the Vikings at MetLife Stadium on Sunday.

Ryan Connelly‘s promising time as a starter appears to have ended in devastating fashion. The Giants fear the rookie linebacker tore his ACL in their win over the Redskins, a source told Ralph Vacchiano of SNY. 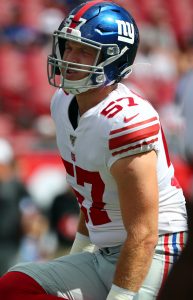 It isn’t official yet but since field tests for ACL tears are extremely accurate, he almost certainly is out for the season. It’s a really tough blow for New York, as they’re already quite thin at linebacker. Alec Ogletree and Tae Davis both are dealing with injuries at the moment, which thrust Connelly into the starting role. Connelly was playing really well before going down, notching a sack and an interception.

He also had an interception in their win over the Buccaneers last week, and was looking like a potential key piece of the defense moving forward. The Giants drafted Connelly in the fifth round, 143rd overall, back in April. New York has been rejuvenated by the insertion of rookie quarterback Daniel Jones, and they now sit at 2-2. They’re right back in the thick of things, but the defense is now very banged up.

With Brandon Brooks going down with a torn Achilles in the second round of the playoffs, the Eagles face an issue regarding how their starting offensive line will look come Week 1. But five months later, Brooks revealed a bit about where his recovery process stands. The veteran guard shared a brief workout video (Twitter link) that shows him doing agility drills again. The fourth-year Eagle will almost certainly begin training camp on the active/PUP list, and it can’t be considered a lock he will be ready for the start of the season. But this represents an encouraging sign from the mammoth offensive lineman.

In the event Brooks is not ready to go in September, a contingency plan might involve a position switch. Halapoulivaati Vaitai, who replaced Jason Peters at left tackle as a rookie in 2017, has worked at guard at times this offseason. The Eagles appear to be preparing Vaitai to be their Brooks stopgap, in the event he needs more time, Dave Zangaro of NBC Sports Philadelphia writes. The Eagles drafted Andre Dillard in Round 1 and have rugby convert Jordan Mailata at tackle as well, so Vaitai working at guard may be a way to stay on the roster. This is interesting given that Stefen Wisniewski (24 Eagles left guard starts from 2016-18) re-signed in May. It would stand to reason the experienced interior lineman would be the Brooks fill-in, but Doug Pederson mentioned a possible Vaitai-Lane Johnson right side recently.

Shifting to more NFC East position battles, here is the latest out of the division: