The 49ers have agreed to a one-year extension with offensive tackle Shon Coleman, according to Matt Maiocco of NBC Sports (on Twitter). Last year, Coleman came into training camp last year as the favorite to become the team’s main swing tackle. Then, he suffered a season-ending ankle injury that caused the team to change course.

Coleman suffered a dislocated ankle and fractured fibula during the first game of the preseason, an injury that immediately ruled him out for the rest of 2019. Fortunately, he’s now fully recovered and ready to help the defending NFC champs.

In other Niners news, DeForest Buckner is now a member of the Colts thanks to Monday afternoon’s shocking trade. In the swap, the 49ers have received the Colts’ first-round pick at No. 13 overall, a selection that could be flipped to give them a better stockpile of picks in April.

Cardinals executive vice president/COO Ron Minegar was arrested on suspicion of driving under the influence Saturday night in Chandler, Ariz., according to Shane Dale of ABC15. The Cardinals released a statement, calling the act “inexcusable” and indicated it will bring “serious consequences” (Twitter link via NFL.com’s Ian Rapoport). This comes a year after Cardinals GM Steve Keim was arrested for DUI. Keim served a five-week suspension for that. Minegar has been with the Cards much longer than Keim, joining the franchise in 2000. He serves mostly in a business-side capacity.

The 49ers have acquired offensive tackle Shon Coleman from the 49ers, both clubs announced. San Francisco will send a 2019 seventh-round pick to Cleveland. 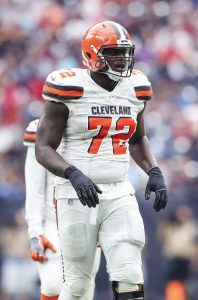 While the Browns still aren’t sure how they’ll formulate a post-Joe Thomas offensive line, Coleman won’t be part of their front five. Coleman, a 2016 third-round pick under Cleveland’s previous regime, started all 16 games at right tackle last season as a middling option, ranking 56th among 79 qualified tackles, per Pro Football Focus.

Coleman wasn’t in the Browns’ long-term future, but he could give the 49ers valuable depth. Joe Staley and Mike McGlinchey are locked in at left tackle and right tackle, respectively, for San Francisco, but Coleman is a viable swing option. His presence on the 49ers’ roster could potentially force the release of Garry Gilliam, who’s been dealing with a concussion for multiple weeks.

San Francisco will now control Coleman at minimum salaries for the next two seasons. Cleveland, meanwhile, will take on roughly $200K in dead money in each of the next two years.

This does not come as a great shock, but 2018 No. 1 overall pick Baker Mayfield will open the season as the Browns’ backup signal-caller, as Jeff Schudel of the News-Herald tweets (though head coach Hue Jackson wants to inform his team of his decision before making it official). It was always understood that Tyrod Taylor, whom the Browns acquired in an offseason trade with the Bills, would serve as the team’s starting quarterback at least until Mayfield is deemed ready, and we recently heard that Cleveland is allegedly open to extending Taylor’s contract (he is eligible for free agency at season’s end).

The decision to name Mayfield the No. 2 QB, then, is actually more about the battle between Mayfield and Drew Stanton — Jackson said last week that he was still undecided as to which player would serve as the backup — than the “battle” between Mayfield and Taylor. Stanton, the long-time second-stringer who signed a two-year pact with the Browns in March, will be the team’s No. 3 quarterback, assuming Cleveland elects to keep three QBs.

Now let’s take a look at several more notes out of Cleveland: