The Browns have signed third-round draft pick Jordan Elliott, the team announced. Elliott is the fourth member of the club’s 2020 draft class to sign his rookie deal. 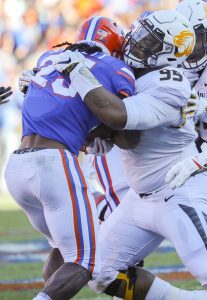 This season, Elliott will attempt to crack Cleveland’s interior DL rotation behind Larry Ogunjobi and Sheldon Richardson. But Ogunjobi is eligible for unrestricted free agency next year, and Richardson is set to carry a cap hit of nearly $14MM with a minimal dead cap charge in 2021, so Elliott could be in line for a bigger role soon if he performs well.

Elliott started his collegiate career at Texas before transferring to Missouri. He became a full-time starter in 2019, recording 44 tackles and 2.5 sacks en route to All-SEC first team honors. He should be stout against the run right away, and while he has the potential to make an impact as an interior pass rusher, he will need more development in that regard.

Per the terms of his slot, Elliott will take home a four-year pact worth about $4.5MM, with a signing bonus just shy of $900K.

Here’s the rundown of where things stand with Cleveland’s seven-man class, courtesy of PFR’s tracker:

As Tua Tagovailoa continues to rehab from a hip injury, the quarterback is uncertain whether he’ll enter the NFL Draft or stay at Alabama for another season. In a conversation with Cecil Hurt of TideSports.com (and passed along by Ian Rapoport of NFL.com on Twitter), Tagovailoa said he’ll continue to discuss his future with his parents in anticipation of the January 20th deadline to declare for the draft.

“If I leave, I think the risk is a little higher. That risk would be how far do I drop in the draft. To me, it’s 50-50 between going in the first round and possibly going in the second round. If I go somewhere from first (overall) to around 24th, the money will be set. But let’s say — and I am just picking a number — that I go to the 31st pick. That would be about 9 million dollars. That’s a lot of money, an amount of money I’ve never had before, but it’s not high first-round money and you can never make that money up. They say you can (make it up) on your next contract but money lost is money lost to me.

“Those are the deciding factors. If my parents tell me that they think I should leave, that is obviously going to be a factor. But so far, they’ve told me that it’s my decision.”

The quarterback doesn’t have a timetable for his return from injury. Even with the ailment, we recently heard that Tagovailoa would still be a first-round pick in the 2020 draft.