The Dolphins plan to release safety Adrian Colbert, as Barry Jackson of the Miami Herald writes. Miami signed Colbert off the Seahawks’ practice squad in November, and he played in six games (five starts) for the ‘Fins down the stretch. 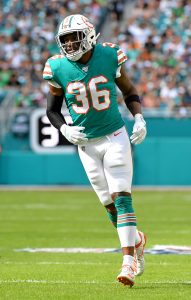 Colbert was eligible for restricted free agency this offseason, and while the Dolphins opting against giving him an RFA tender, they did re-sign him several days later. But the club just claimed Jeremiah Dinson off waivers from the Lions, and Dinson will now compete with third-round rookie Brandon Jones, among others, for a backup safety spot.

Meanwhile, Colbert will look to recapture the form he showed in his rookie campaign with another team. The 49ers selected the Miami product in the seventh round of the 2017 draft, and by Week 10 of that season, he had made his way into the starting lineup. He opened the 2018 season as a starting safety but was not as effective as he had been the year before, and he was ultimately placed on IR in October 2018.

San Francisco released him via injury settlement last September, and he caught on with Seattle shortly thereafter before getting his opportunity in South Beach.