Teams may still designate players to return from IR during the playoffs, and the two NFC North squads still playing took advantage of this flexibility. Teams are designated two IR-return spots each season.

After spending the last week as a free agent, it sounds like Brett Jones is going to land back in Minnesota. Chris Tomasson of the St. Paul Pioneer-Press reports (via Twitter) that the veteran center is expected to re-sign with the Vikings. Jones returned to Minnesota last night, and he could be signed as soon as tomorrow. 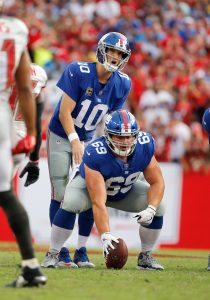 The Vikings let go of the 28-year-old last Monday to make room for wideout Josh Doctson. At the time, Tomasson suspected that the six-year pro would end up back in Minny. The reporter’s intuition proved to be right.

Hailing from Saskatchewan, Jones spent two years in the CFL with the Calgary Stampeders, earning an All-Star nod and a league championship in 2014. He eventually made his way to the NFL after signing with the Giants in 2015. He spent the next three years with the organization, including a 2017 campaign where he started 13 of his 16 games.

Last August, Jones was traded from the Giants to the Vikings in exchange for a seventh-rounder. He started the first three games in place of Pat Elflein, and he ultimately settled into a backup role for his other 11 appearances. He re-signed with the organization this offseason on a one-year deal that could pay upwards of $1.5MM. It’s uncertain if he’ll receive a similar contract this time around.

The Vikings have agreed to sign Josh Doctson, according to Adam Schefter of ESPN.com (on Twitter). The Vikings initially elected to keep four receivers on their roster, but Doctson will occupy the fifth spot to support Stefon Diggs, Adam Thielen, Chad Beebe, and Olabisi Johnson.

Fun fact: Doctson was selected one spot ahead of Laquon Treadwell in the 2016 draft. The Vikings dropped Treadwell over the weekend and, effectively, swapped him for Doctson.

Doctson has history with Kirk Cousins, which suggests that he could be in line for more targets than your average WR5. On the other hand, they didn’t exactly set the world on fire either – in 18 games with Cousins at QB, Doctson caught just 37 balls for 568 yards and six scores.

Doctson has started 26 games over the past two years for Washington, but this has only resulted in 79 total catches for 1,034 yards and eight touchdowns. Last year, he placed 96th out of 107 qualifying wideouts in yards per route run last season, according to Pro Football Focus.

In a corresponding move, Minnesota released center Brett Jones, though Chris Tomasson of the St. Paul Pioneer Press tweets that the Vikings could end up re-signing Jones at some point if he is not signed by another club.

The Vikings have re-signed center Brett Jones, per a club announcement. It’s a one-year deal with a base salary of $850K that could be worth up to $1.5MM through incentives, according to Chris Tomasson of the Pioneer Press (on Twitter).

The Vikings acquired Jones late last summer via trade with the Giants. In his first season with the Vikes, Jones appeared in 14 games, including three starts at center. Prior to that, Jones appeared in 30 games (14 starts) across three seasons with the G-Men and won a Grey Cup title in 2014 with the CFL’s Calgary Stampeders.

The Vikings offered Jones a contract earlier this month, but he did not immediately accept. Meanwhile, center Tyler Shatley circled back to the Jaguars after visiting with the Vikings and Jones, as far as we know, did not go on any other visits. It only made sense for the two sides to reunite as the Vikings needed a backup for Pat Elflein.

Jones started the first three games of the 2018 season while Elflein was injured. He’s likely eager to start somewhere, as he did with the Giants in 2017, but he’ll serve as Elflein’s understudy for at least one more year. Jones can also play guard, which may give him another path to getting on the field. 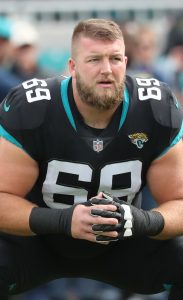 Since losing interior lineman Nick Easton to the Saints, the Vikings have ramped up their efforts to re-sign center/guard Brett Jones, Chris Tomasson of the Pioneer Press hears (on Twitter), adding that he expects a contract offer to come soon. However, the Vikings will have competition for his services.

The Seahawks, Jets, Eagles, and Chiefs are also looking at the soon-to-be 28-year-old, Tomasson hears. Jones, who earned $2.914MM under the one-year restricted free agent tender assigned to him by the Giants, is likely in line for a pay raise.

Last year, Jones appeared in 14 games and came off of the bench for eleven of those contests. His 191 snaps were not enough to qualify for a Pro Football Focus ranking, but he was a top 20 center for the Giants in 2017.

The Giants have traded center Brett Jones to the Vikings in exchange for a 2019 draft pick, New York announced. New York will acquire a 2019 seventh-round choice, tweets Ralph Vacchiano of SNY.

Minnesota is in desperate need of help on the interior of its offensive line, as projected starting guard Nick Easton is already done for the season after undergoing neck surgery, while center Pat Elflein has been on the physically unable to perform list for the duration of training camp. Elflein is dealing with shoulder and ankle injuries, but Vikings head coach Mike Zimmer says Elflein won’t begin the regular season on the PUP list, according to Chris Tomasson of the St. Paul Pioneer Press.

A former undrafted free agent, Jones started 13 games in place of the injured Weston Richburg a season ago. Jones, who joined the Giants in 2015 after spending time in the Canadian Football League, graded as the NFL’s No. 18 center among 37 qualifiers, per Pro Football Focus. However, the 26-year-old was expected to lose New York’s starting center job to Jon Halapio, making him expendable in the Giants’ view.

The Giants re-signed Jones this offseason on a one-year, $2.941MM second-round restricted free agent tender, and the Vikings will now assume the entirety of that contract. At last check, New York possessed only ~$1.5MM in cap space, so moving Jones and his salary off its books will give the club a little financial breathing room.

Jones was one of 14 NFL restricted free agents to be tender at the second-round level, and he’s the sixth — following Falcons guard Ben Garland, Jaguars running back Corey Grant, Seahawks cornerback Justin Coleman, and Jets receiver Quincy Enunwa, and Steelers kicker Chris Boswell — to officially sign his tender. There was no rush for Jones to ink his tender, as RFAs have until April 20 to work out offer sheets with other clubs. However, it was always unlikely that any NFL team would have been willing to sacrifice a second-round pick in order to land Jones.

New York didn’t make an attempt to re-sign free agent Weston Richburg, meaning Jones will be the club’s starting center in 2018. He should be well-equipped for the role, as the 26-year-old started 13 games in place of the injured Richburg a season ago. Jones, who joined the Giants in 2015 after spending time in the Canadian Football League, graded as the NFL’s No. 18 center among 37 qualifiers, per Pro Football Focus.