Another day, another Jaguars offensive tackle heading to injured reserve. Tom Pelissero of NFL.com tweets that Jacksonville is placing rookie lineman Will Richardson on the IR. The move was made to make room for running back Carlos Hyde, who passed his physical and is now officially on the Jaguars’ 53-man roster. 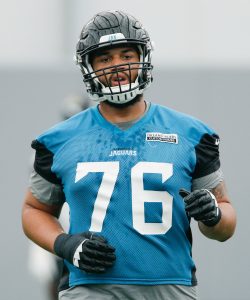 The Jaguars have struggled with injuries up and down their roster, and Richardson will now join fellow offensive tackles Josh Wells and Cam Robinson on the injured reserve. The injuries have forced the team to rely on Josh Walker and Jermey Parnell as their starters, and the duo have underwhelmed so far this season. The move will also leave the Jaguars with only a pair of reserve offensive lineman in Ereck Flowers and Chris Reed.

Following a standout career at NC State, the Jaguars selected Richardson in the fourth round (#129) of this past year’s draft. While the rookie was active for last weekend’s game, he didn’t see the field for a regular season contest. Richardson had been dealing with a knee injury for much of the season, and the ailment has now landed him on the IR.

With Leonard Fournette continuing to deal with a hamstring injury, the Jaguars acquired Hyde from the Browns yesterday.