The Titans are expected to promote tight ends coach Todd Downing to the role of offensive coordinator (Twitter link via NFL.com’s Ian Rapoport). Downing takes over for Arthur Smith, who has left to serve as the Falcons’ head coach. 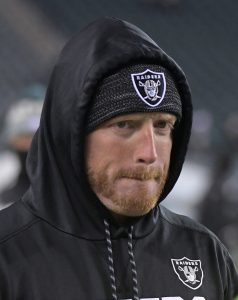 Smith also went from the Titans’ TE guru to the OC role, so the organization is hoping for similar success this time. Downing, 40, started out in the NFL as a football systems analyst with the Vikings in 2003. Since then, his NFL journey has included stops with the Rams, Lions, Bills, and Raiders.

This marks Downing’s second pro stint as an OC with his first coming in Oakland. Things didn’t go as planned for Downing as he lost quarterback Derek Carr to a serious back injury in the fall. Ultimately, his team placed near the middle of the pack in total yards and in the lower-third of the NFL for points scored.

Now, Downing will direct a Titans’ offense featuring QB Ryan Tannehill, running back Derrick Henry, and wide receiver A.J. Brown. Meanwhile, on the other side of the ball, head coach Mike Vrabel may hire a coordinator to take some of the defensive responsibilities off of his plate.

The Titans have added a former offensive coordinator to their staff. NFL.com’s Ian Rapoport reports (via Twitter) that the team has hired Todd Downing as their new tight ends coach.

Downing, 38, had a brief stint as the Raiders offensive coordinator back in 2017. While his experience is limited, he’ll still be able to provide Arthur Smith with some guidance. Smith was promoted to the Titans’ offensive coordinator role earlier this week after having spent the past eight seasons with the organization (including the past three as the tight ends coach).

Downing was fired by the Raiders organization following the 2017 campaign, and he was subsequently hired as the Vikings tight ends coach. The coach played a significant role in Kyle Rudolph‘s productive campaign (64 receptions, 634 yards, four touchdowns), and he also helped play a role in David Morgan and Tyler Conklin‘s emergence. While the duo didn’t do much in the passing game, they rated out as above-average blocking tight ends in 2018 (per Pro Football Focus).

The coach will be joining a talented tight ends corps in Tennessee. Delanie Walker missed the majority of the 2018 season with an ankle injury, but he had compiled at least 800 receiving yards in each of the previous four seasons. The team is also rostering former third-rounder Jonnu Smith, who finished this past season with 20 receptions for 258 yards and three touchdowns.

Following the tragic and unexpected death of offensive line coach Tony Sparano this week, the Vikings have made some adjustments to their coaching staff. Ben Goessling of the Star Tribune reports (via Twitter) that the team will names Clancy Barone and Andrew Janocko co-coaches for the offensive line.

Barone, who’s been working in the NFL since 2004, was the Vikings tight ends coach last season. With the reorganization of the coaching staff, senior offensive assistant (and former Raiders offensive coordinator) Todd Downing will take on the tight ends gig. Meanwhile, Janocko had previously served as the team’s assistant offensive line coach.

NFL.com’s Ian Rapoport notes (via Twitter) that the team had also pursued former Vikings head coach Mike Tice for the offensive line job. We heard back in February that the 59-year-old was eyeing retirement.

Todd Downing looks set for a homecoming venture. The recently dismissed Raiders offensive coordinator has landed a job with the Vikings, with Adam Caplan of ESPN.com reporting (on Twitter) he will serve as a senior offensive assistant and passing-game specialist.

Not only did the Vikings give Downing his first NFL opportunity, as an intern in 2001 when the future OC was just 21, but Downing is an Eden Prairie, Minn., native. The Vikings’ facility being located in Eden Prairie makes this a logical move for the 37-year-old assistant to rebound from a one-and-done stint as the Raiders’ OC.

Downing served as Oakland’s quarterbacks coach prior to ascending to OC in 2017, but the Raiders underwhelmed last season and turned back to Jon Gruden. Downing will join new OC John DeFilippo and QBs coach Kevin Stefanski as key staffers involved with Minnesota’s aerial attack. With each of these coaches under 40, and Mike Zimmer being a defensive-minded HC, the Vikings will have young voices in charge of their offense.

The Bears interviewed Downing in January for their QBs job but went in another direction. Downing’s work helping Derek Carr ascend to the position of MVP candidate in 2016 led to him becoming the Raiders’ OC. The Raiders proceeded to plummet from the No. 6 offense, their finish in 2016 under Bill Musgrave, to No. 17 during Downing’s year overseeing the unit.

Former Raiders offensive coordinator Todd Downing is interviewing to become the Bears’ next quarterbacks coach, according to Brad Biggs of the Chicago Tribune. Adam Caplan of SiriusXM (Twitter link) reports that while Downing is indeed meeting about a position on Chicago’s offensive staff, the interview isn’t necessarily for the QBs coach vacancy.

Downing, Oakland’s quarterbacks coach from 2015-16, lasted only a single season as the Raiders’ offensive play-caller before being fired along with head coach Jack Del Rio and the rest of the Oakland staff. During Downing’s short stint atop the offense, the Raiders slipped in yards (from sixth in 2016 to 17th in 2017), points (seventh to 23rd), and DVOA (eighth to 13th).

However, the 37-year-old Downing drew rave reviews for his work as quarterback Derek Carr‘s position coach during the latter’s second and third NFL campaigns. Carr undoubtedly posted the two best seasons of his four-year career with Downing as his tutor, a sign that Bears signal-caller Mitch Trubisky — the No. 2 overall selection in the 2017 draft — could thrive under Downing.

Downing isn’t the only candidate for Chicago’s quarterbacks coach vacancy, however, as Texans offensive assistant Pat O’Hara interviewed for the job today, tweets John McClain of the Houston Chronicle. Mark Berman of FOX 26 first reported last week that Chicago could have interest in O’Hara, while Biggs added that an O’Hara addition wouldn’t necessarily mean that incumbent Bears QBs coach Dave Ragone moves on.

The Raiders fired defensive coordinator Ken Norton earlier this week, and Jason La Canfora of CBS Sports writes that offensive coordinator Todd Downing is coaching for his job. Per La Canfora, the Raiders are unlikely to bring Downing back for 2018, and while head coach Jack Del Rio — who received a lucrative extension prior to the season — is probably not going anywhere, it appears as if his staff will look quite different next year.

Downing was a hot offensive coordinator candidate last offseason and drew interest from multiple clubs. The Raiders ultimately decided to promote him after allowing former OC Bill Musgrave‘s contract to lapse, but their offense has taken a significant downturn with Downing at the helm.

Downing, 37, has had success as a quarterbacks coach in the past, serving in that capacity with the Lions from 2011-13, the Bills in 2014, and the Raiders from 2015-16. Under his tutelage, Derek Carr became one of the better quarterbacks in the league, but Carr has regressed this season and the offense is missing the big plays that it enjoyed under Musgrave. The offense ranks just 18th in offensive points scored, 21st in yards per game, 22nd in plays of 10 yards or more, 27th in rushing yards, and 21st in overall passing.La Canfora adds that Downing has not endeared himself to other coaches and front office members, which could help trigger his ouster.

If the team does look for a new OC in 2018, La Canfora names Mike McCoy as a potential candidate. Per La Canfora, McCoy has been approached by several teams who want him to work as a consultant for the duration of 2017, but he is unlikely to entertain any such advances. Instead, he will simply wait for the winter hiring period, when he will be one of the more coveted coordinators on the market.

Even if Del Rio does not hire McCoy, he is likely to seek someone with more experience in light of Downing’s disappointing first season.

New Raiders offensive coordinator Todd Downing had a year remaining on his deal, but the contract allowed the ex-quarterbacks coach to interview for other clubs’ offensive coordinator vacancies, according to Jerry McDonald of the Oakland Tribune (Twitter link). Without naming any particular team, Downing confirmed previous reports that multiple clubs expressed interest in hiring him as OC. Instead, Oakland parted ways with former play-caller Bill Musgrave and installed Downing as coordinator.

Here’s more from the 201 hiring cycle: