A Brian Flores hire, Josh Boyer stayed on for Mike McDaniel‘s first Dolphins season. The team will not keep its defensive coordinator around for 2023.

The Dolphins have fired Boyer, Ian Rapoport and Tom Pelissero of NFL.com report (on Twitter). The Dolphins have announced the move. The ex-Patriots assistant was in place for four seasons in Miami, the past three as the team’s DC. 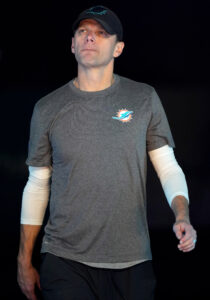 Miami’s defense dropped from 16th to 24th in points allowed from 2021-22 and fell from 10th to 15th in DVOA. Boyer not being a McDaniel hire certainly made his seat warm coming into the season. Flores hired Boyer, a 13-year Patriots assistant, as his cornerbacks coach in 2019. After Patrick Graham left to become the Giants’ DC in 2020, Boyer stepped in. McDaniel, who did add his own OC last year, will now be responsible for the Fins’ other main coordinator hire.

Although the Dolphins ranked sixth in scoring defense during Boyer’s first DC season (2020), the team poured in major investments on the unit in the years since. The Dolphins drafted Jaelan Phillips in the 2021 first round and re-signed Emmanuel Ogbah in 2022. The team sent first- and fourth-round picks to the Broncos for Bradley Chubb at the deadline but lost Ogbah for the season soon after. Chubb recorded just 2.5 sacks in eight games as a Dolphin.

Boyer did not have the benefit of Ogbah for the season’s second half and was without Byron Jones for all of the 2022 season. The veteran cornerback underwent surgery in March 2022, and while that procedure was to have him back well before training camp, the injury lingered throughout the year. That said, NFL.com’s Cameron Wolfe tweets some Dolphins were not fans of Boyer’s scheme.

Injuries at quarterback also impacted Miami’s defense this season, but the team will sever much of its remaining Patriots ties. Gregory, an ex-Pats defensive back, has been with the team since 2021. Steve Ferentz, the son of ex-Bill Belichick coworker-turned-Iowa HC Kirk Ferentz, joined Miami’s staff in 2020.

Come 2023, the Dolphins will have employed eight combined OCs and DCs. Flores proved to be trigger-happy with his offensive play-calling post, and with McDaniel running the show on offense, the franchise will have a new play-caller on the other side soon.

The Dolphins have dropped five straight and find themselves out of the postseason picture, a major disappointment for an organization that was looking to take a step forward this season. Heads will surely roll if Miami fails to qualify for the playoffs, and a source told Armando Salguero of Outkick.com that defensive coordinator Josh Boyer could be a casualty.

Boyer’s job status could somewhat be connected to that of Mike McDaniel, with Salguero noting that if the head coach survives the offseason, then there’s no guarantee Boyer sticks in his position. Boyer was a holdover from Brian Flores’ staff, so it wouldn’t be surprising if McDaniel looks to shake things up with his own defensive coordinator. Even then, if McDaniel is canned following the season, there’s little chance Boyer would manage to stick around with a third head coach.

Boyer joined the NFL coaching ranks with the Patriots, where he worked his way up from defensive assistant to cornerbacks coach. He joined Flores in Miami in 2019 and earned the title of defensive pass game coordinator, and he was promoted to defensive coordinator in 2020. After ranking top-1o in points allowed during his first season at the helm, the Dolphins dropped to 16th in 2021 and 27th this season. The defense has been especially bad during the team’s current streak; after allowing around 23 points per game during their 8-3 start, opponents have averaged more than 30 points per game during the active five-game losing streak.

The defensive coordinator’s fate will be one of many decisions for Dolphins executives to make in anticipation of the offseason. Salguero explored the job security of McDaniel in particular, with the writer wondering if the coach has done enough to prevent the organization from pursuing someone like Sean Payton. The Dolphins will also have to make a decision on Tua Tagovailoa, with Salguero noting that owner Stephen Ross would be interested in Aaron Rodgers if the veteran QB was willing to play in Miami.

While the coaching staff in Miami has seen some notable changes this offseason, the man at the head of the defense will be remaining with the team. As Pro Football Talk’s Josh Alper writes, Josh Boyer will be retained as the Dolphins’ defensive coordinator.

New head coach Mike McDaniel has been busy assembling his staff on the offensive side of the ball. Yesterday saw the addition of Jon Embree as assistant head coach, along with Wes Welker to coach the teams’ wide receivers. The search for a new offensive coordinator also began, as the team interviewed veteran coach Curtis Johnson for the position.

On the defensive staff, though, continuity was expected given not only McDaniel’s status as a first-time HC, but the unit’s success in the latter half of the season in particular. It was reported at the beginning of the week that Boyer was one of several members of the defensive staff McDaniel would be trying to keep in place, so this news isn’t a surprise.

Boyer, 45, began his NFL coaching career with the Patriots in 2006, where he worked with the team’s secondary. When Brian Flores left Foxborough to take the HC job with the Dolphins in 2019, Boyer followed. After one season working with Miami’s cornerbacks, he replaced Patrick Graham at the DC role.

The Dolphins tied for fifth in the NFL in sacks this past season, with 48, giving up scoring (21.9) and yardage (337.5) totals that are more than respectable, given the team’s offensive struggles. With a familiar face at the helm in 2022, they’ll look to build on that foundation.

Graham was already the defensive play-caller in Miami, but the team allowed him to interview anyway. NFL Insider Adam Caplan says Graham will also be given the title of assistant head coach in New York, which may be part of the explanation (Twitter link).

Graham coached with new Giants head coach Joe Judge in New England, so there’s a lot of familiarity there. Graham got his start as a graduate assistant at Wagner College back in 2002 and spent most of the next decade in the college ranks before making the jump to become an assistant with the Patriots in 2009.

He also served as defensive line coach with the Giants in 2016 and 2017 under Ben McAdoo, so this is a homecoming for him. As for the Dolphins, they’ll now have two new coordinators in 2020. They elected to fire offensive coordinator Chad O’Shea after the season, replacing him with Chan Gailey. The Dolphins’ defense obviously wasn’t too good this past year, but Graham was working with startlingly little talent, so it’s hard to hold that against him.

Boyer is another former Patriots assistant who rose through the ranks under Bill Belichick. He served as cornerbacks coach for New England for seven straight years before Flores hired him to be his passing game coordinator and cornerbacks coach last season.

Boyer joined New England in 2006 as a defensive assistant after serving as defensive coordinator at the South Dakota School of Mines. After spending three seasons as an assistant, he assumed defensive backs coach duties, and served in a similar position from 2009 to 2018. With the Patriots, Boyer won three Super Bowls.

He will become defensive backs coach in Miami while also serving as the defensive pass game coordinator.