Giants To Trade B.J. Hill To Bengals For Billy Price

We’ve got another trade to report! Not too long after the Bills dealt Darryl Johnson to the Panthers, the Giants and Bengals have pulled off an interesting swap. New York has agreed to trade defensive lineman B.J. Hill, head coach Joe Judge announced to the media on Monday. 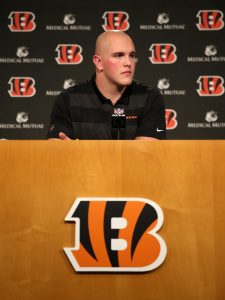 Right after Judge said Hill would be traded, Ian Rapoport of NFL Network tweeted that it was to the Bengals for offensive lineman Billy Price. The Bengals will also get a conditional seventh-round pick in the deal, Pat Leonard of the New York Daily News notes in a tweet. In a follow-up tweet, Rapoport notes that Price has been a “key name” in trade talks recently, and that the Giants were searching for O-line depth.

Price wasn’t the only Bengals lineman on the block, as Albert Breer of SI.com tweets that Cincy also had discussions about guard Michael Jordan. He adds that the Jaguars joined the Giants as teams calling around about interior offensive line help this week.

A former first-rounder, Price was the 18th overall pick back in 2018. Cincinnati declined his fifth-year option this past offseason, meaning he’ll be a free agent after this season. The Ohio State product never lived up to his draft status, and could benefit from the change in scenery.

He was Cincy’s starter at center as a rookie, then moved to guard and only started eight games in 2019. This past season he was mostly a reserve, only starting one game. Hill was a third-round pick back in 2018, and also declined after his rookie year.

In his first pro season he had 5.5 sacks while starting 12 games, but over the past two years he’s had just two total sacks while being reduced to a rotational role. It makes sense for both sides, with each addressing an area of need.

Wide receiver Cody Latimer has had an up and down journey since entering the NFL. He came into the league as a second round pick of the Broncos in 2014, but never really established himself as a receiving threat. He was immediately labeled a bust by fans and media, and was never really able to recover. Latimer was able to stick in Denver by becoming an elite special teams player, excelling on kick coverage units.

This past year, Latimer finally began to catch some passes. After never cracking 100 yards receiving his first three seasons, he racked up 287 last year along with two touchdowns. He averaged an impressive 15.1 yards per catch and parlayed that progress along with his special teams prowess into a one-year $2.5MM contract with the Giants. Now with New York, Latimer has already been making an impression. He’s reportedly done well during offseason workouts, and the Giants’ number three receiving job is now “his to lose” according to Matt Lombardo of NJ.com.

Latimer appears to have turned his career around, and looks likely to have the biggest offensive role in his career this upcoming season. He’ll be an unrestricted free agent again this March, and if he shows well for the Giants, he should be able to cash in.

Although there was some mystery as to what substance caused Patriots wideout Julian Edelman to face a four-game performance-enhancing drug suspension, he didn’t question the results of the test itself in his appeal, tweets Ben Volin of the Boston Globe. Instead, Edelman centered the appeal around the paperwork and documentation surrounding his failed test. In the end, the actual substance that triggered Edelman’s failed test doesn’t matter, as the NFL has the authority to ban players who test positive for unrecognizable substances. Edelman’s appeal was denied today, meaning he’ll miss the first quarter of New England’s 2018 campaign.

The next several weeks could be crucial in the Giants/Odell Beckham Jr. relationship. The superstar wideout said he intends to show up to camp on time, but this may not be a full-on pledge. Instead, it could be contingent on how extension talks — currently not going well — proceed. In an expansive piece attempting to gauge this situation, ESPN.com’s Bill Barnwell writes the presence of Dave Gettleman could make a significant difference in this process.

Famously known as a hard-line negotiator, alienating Steve Smith and rescinding Josh Norman‘s franchise tag in Carolina, Gettleman has repeatedly said he wants the Giants to be geared around their ground game more than they have been in the past. He authorized the highest running back draft pick since Reggie Bush and could have four new starting offensive linemen come Week 1. Barnwell suggests the Giants could use this season to see how Saquon Barkley impacts their offense rather than authorizing a wide receiver-record contract for Beckham before the season. This strategy certainly wouldn’t go over well with Beckham, and it could run the risk of a lengthy holdout, but the Giants would also have the franchise tag as a short-term option in 2019.

Here’s the latest on Big Blue coming out of minicamp.

The Giants have signed another draft pick. ESPN’s Field Yates tweets that the team has signed third-round defensive lineman B.J. Hill. The rookie was selected with the 69th pick in this year’s draft. 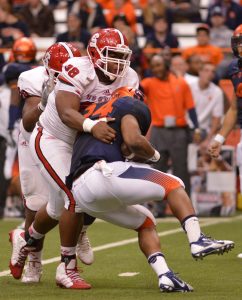 The 22-year-old had four standout season at NC State, playing in a total of 48 games. His best year came in 2015, when he finished the campaign with 50 tackles, 11 tackles for loss, and 3.5 sacks. He earned an All-ACC honorable mention nod during his senior campaign after he finished with 55 tackles, 3.5 tackles for loss, two sacks, and one forced fumble.

Veteran Damon Harrison is currently slotted in as the team’s starting nose tackle, but the 6-foot-3, 311-pound Hill appears to be his natural successor. For the time being, the rookie will compete with Robert Thomas, A.J. Francis, Jordan Williams, and Josh Banks for playing time.

Hill, who played four seasons at North Carolina State, has bounced around NFL.com’s Daniel Jeremiah’s top-50 prospect rankings. After not appearing on the initial list, the lineman was listed 42nd in an early-March update. Earlier this week, Hill dropped to No. 50 on the list. Both ESPN’s Mel Kiper Jr. and Todd McShay recently had the defensive tackle being selected among the top-60 picks.

The Falcons could use some reinforcement at defensive tackle, although the team is currently rostering four players at the position. Grady Jarrett and Jack Crawford are currently slated as the starters with Taniela Tupou and Joey Ivie on the bench.