For the second time in 2019, the Panthers have released kick returner Greg Dortch. The move comes two days after Dortch fumbled a return in the Panthers’ loss to the Falcons. 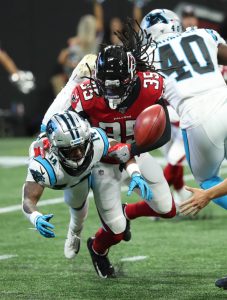 Dortch, listed as a wide receiver, has yet to catch a pass at the NFL level. With the Panthers, he’s served as the kick and punt return specialist on two separate occasions. His first opportunity came in Week 9, when he returned two kickoffs and two punts against the Titans.

Then, on Sunday, he coughed up the ball on a third quarter kickoff return. The Falcons turned that change of possession into a field goal, en route to a 40-20 win.

The 5-8 Panthers will have someone else fielding kickoffs and punts as they wrap up the year against the Seahawks, Colts, and Saints.

Weeks after claiming Donte Moncrief, the Panthers will send him back to the waiver wire. Carolina cut Moncrief and will replace him with another wide receiver — practice squad promotion Greg Dortch — providing another sign the veteran is running out of chances. 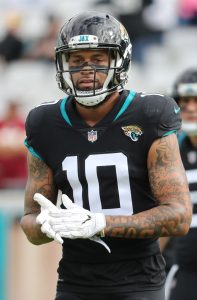 The Panthers became the second team this season to cut bait on the sixth-year receiver, following the Steelers’ lead. Pittsburgh benched the 6-foot-4 talent, despite giving him its No. 2 wideout job after the preseason, early in the year before waiving him in early November.

A former third-round pick, Moncrief did not catch a pass in three outings with the Panthers. He caught four for 18 yards as a Steeler. This represents a steep descent for the former Colts and Jaguars cog, who caught 48 passes for 668 yards and three touchdowns as a Jaguar last year. That prompted the Steelers to give him a two-year, $9MM deal. If no one claims Moncrief by Monday afternoon, he will be a free agent.

A 5-foot-7 rookie UDFA claimed by the Panthers in September, Dortch has played in one game with the Panthers. He served as Carolina’s return man in Week 9 against the Titans.