For the second straight season, Falcons safety Keanu Neal‘s season has ended with a devastating injury. Neal is believed to have torn his Achilles during the team’s loss to the Colts earlier today, a source told Ian Rapoport of NFL Network (Twitter link).

The Falcons placed Neal on IR and promoted safety Jamal Carter from their practice squad, per Howard Balzer of BalzerFootball.com (on Twitter).

Obviously, his year is over. Rapoport writes that Neal will have surgery this week, and “should be good to go well before the 2020 season.” In Week 1 of last year Neal tore his ACL, and this latest injury was to the same leg. Atlanta picked up his fifth-year option earlier this offseason, keeping him under team control through 2020. The good news for him is that option year was fully guaranteed for injury at around $6.7MM and assuming he can’t pass a physical on the first day of the new league year, he’ll get that cash no matter what.

Neal has been a good player when healthy, but he’ll now have missed 28 games over the past two seasons. It’s a tough blow for a Falcons defense that already hasn’t looked great this year and was one of the most injured units in the league last year. Atlanta drafted the Florida product in the first-round back in 2016.

He started all 16 games in 2017, racking up 113 tackles, six passes defended, and an interception. The Falcons’ secondary got diced up by Jacoby Brissett on Sunday, and now they’ll be without one of its key cogs moving forward. They currently sit at 1-2 and will host the Titans in Week 4.

A UDFA out of Miami, Carter spent two years with the Broncos. He missed all of the 2018 season and was moved to linebacker in training camp. The Broncos waived him prior to the regular season’s outset, however, leading him to the Falcons’ taxi squad. Carter is back at safety and will likely fill in as a backup for the Falcons, who also lost J.J. Wilcox to a season-ending injury earlier this year.

Broncos safety Jamal Carter is done for the year, according to Mike Klis of 9News (on Twitter). Carter suffered a torn hamstring in Saturday’s preseason contest against the Vikings that will require surgery. The Broncos will place Carter on IR in order to free up a roster spot. 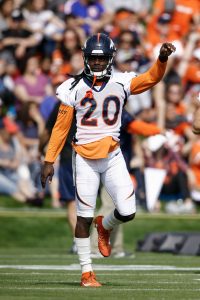 Carter played in all 16 games for the Broncos last season as a reserve. Although he was not a star for Denver, the Broncos were counting on him to serve as an important special teams player in 2018.

Luckily, the Broncos still have quality depth behind starting safeties Darian Stewart and Justin Simmons. Will Parks and Su’a Cravens figure to see a fair amount of snaps while Dymonte Thomas and Jordan Moore may have improved odds of making the final cut.

There are a couple of critical dates coming up in the Aaron Donald saga this week, as Mike Florio of Pro Football Talk points out. If Donald does not report to the Rams by August 7, he will not earn a year of credit towards free agency, which means that he would be eligible for restricted free agency next offseason, but not unrestricted free agency. However, Florio says that is not a major deterrent for Donald’s camp, as the Rams would either use the franchise tag on Donald — which, of course, they could also do if he became an unrestricted free agent — or apply a first-round restricted free agent tender. If Los Angeles went with the latter option, there would be any number of teams willing to extend a massive offer sheet to Donald and to surrender a first-round pick to the Rams if the Rams elected to not match the offer sheet, so Florio suggests LA would use the franchise tag regardless of whether Donald becomes a UFA or RFA.

The more important date, then, could be August 9, when the Rams play their first preseason game. As we have written previously, Donald could be fined a game check for each preseason game he misses, and between those penalties and the penalties for missing training camp, Donald could be looking at over $3.2MM in fines if he does not show up until the eve of the regular season opener. That reality could make him rethink his holdout, but given a recent report that the standoff could easily drag into September, it appears Donald’s reps are confident that the Rams will waive any penalties when the two sides do finally come to terms (or else that Donald’s contract will be so massive that the lost money won’t really matter).