Kevin Pierre-Louis is signing a two-year deal with the Texans, reports ESPN’s Jeremy Fowler (via Twitter). The deal is worth up to $8MM, per Fowler. 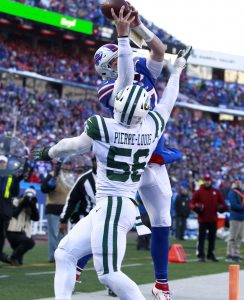 The multiyear offer must have been alluring to the 29-year-old linebacker, who has played for four different teams over the past four years. After spending the first three seasons of his career with the Seahawks, the Boston College product has since spent time with the Chiefs, Jets, Bears, and Washington.

He had one of the better seasons of his career in 2020 with WFT. He started a career-high 11 games, collecting 56 tackles, three tackles for loss, one sack, and one forced fumble. Ron Rivera was apparently a fan of Pierre-Louis, as the head coach stated that he wanted to retain the veteran linebacker.

“I’d love to get a guy with the skill set of Kevin Pierre-Louis, whether it’s Kevin or someone else,” Rivera said recently (via Sam Fortier of the Washington Post on Twitter). “I’d love to have Kevin back.”

Washington has signed linebacker Kevin Pierre-Louis to a one-year deal worth up $3.45MM, according to Ian Rapoport. The six-year veteran will be joining his fifth organization.

Washington does not have elite talent at the linebacker position, but Pierre-Louis likely only factors in as a depth piece barring an injury or an exceptional preseason.

The post-May 7 free agency period has begun to move. The Bears made a move to add linebacker depth on Wednesday.

Chicago signed Kevin Pierre-Louis to a one-year deal, the franchise announced. The Jets made Pierre-Louis a free agent after declining his 2019 option.

Pierre-Louis was part of the 2017 Chiefs, who employed Matt Nagy as their offensive coordinator. Bears inside linebackers coach Mark DeLeone also coached Nagy in Kansas City.

Entering his sixth season, the 27-year-old linebacker has played mostly as a backup in his nomadic career. The Seahawks drafted Pierre-Louis in the 2014 sixth round and kept him around through the 2016 season. Pierre-Louis spent 2017 with the Chiefs and 2018 with the Jets, the latter beginning with a one-game suspension. However, the second-level defender played in nine Jets games upon returning. He ended last season on IR.

The Boston College alum will join a Bears linebacking corps that will return Danny Trevathan and Roquan Smith as its off-ball starters. The Bears made just five draft picks, none a linebacker, so Pierre-Louis figures to have a decent shot at being on Chicago’s 53-man roster come Week 1.

The Jets will not exercise Kevin Pierre-Louis‘ 2019 option, per Brian Costello of the New York Post (via Twitter). The move will create another $2MM in cap space for Gang Green, which is already near the top of the league in that department, with over $100MM to spend in free agency this year.

The 27-year-old Pierre-Louis is a linebacker by trade but has seen his most action as a special teams contributor. In the games in which he suited up in 2018, he appeared in the majority of the Jets’ special teams snaps. He saw a little more burn on the defense towards the end of the season and recorded his only sack on December 12.

He was suspended for Week 1 of the 2018 campaign as a result of a January 2018 arrest that resulted in various marijuana drug and traffic charges. Those charges were dropped several months later, contingent on the completion of one year of probation.

He was something of a sought-after commodity last offseason, having visited multiple teams before agreeing to a two-year, $5.25MM deal with the Jets. His special teams value will almost certainly result in another contract this time around.

Pierre-Louis was drafted by the Seahawks in the fourth round of the 2014 draft and parlayed a strong 2017 season with the Chiefs into his deal with New York. He is the third player whose 2019 option was declined by the Jets today, joining Terrence Brooks and Mike Pennel.