The Packers have identified Mike Pettine‘s defensive coordinator successor. They intend to hire Joe Barry, according to Rob Demovsky of ESPN.com (on Twitter). 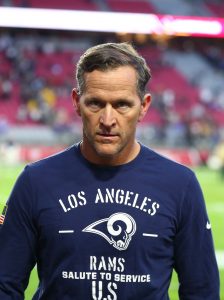 This will continue a busy offseason for Barry, who made a previous move in going from the Rams to the Chargers. Barry spent four seasons with the Rams, coaching with Matt LaFleur in 2017, but agreed to follow Brandon Staley to the Chargers last month. Those plans will change.

After Jim Leonhard indicated he will stay on as Wisconsin’s DC, the Packers job came down to Barry and Rams safeties coach Ejiro Evero, Tom Silverstein of the Milwaukee Journal Sentinel tweets. It appears Leonhard was the favorite for the position, Silverstein adds (on Twitter), with Barry and Evero being the top backup options. Both were Rams staffers from 2017-20, with Evero still on Sean McVay‘s staff. Barry previously agreed to bolt with Staley and become the Chargers’ defensive passing-game coordinator.

Barry brings defensive coordinator experience to Green Bay, but his previous units mostly struggled. Barry worked as the Lions’ DC from 2007-08. Both seasons ended with Detroit’s defense ranking last in points and yards allowed, with the second ignominiously concluding with an 0-16 record. Barry resurfaced as a coordinator in Washington from 2015-16. While both those defenses landed just inside the top 20 in points allowed, each ranked 28th in total defense. Washington fired Barry after the 2016 season.

The Rams interviewed Barry for their DC post last year, but Staley wound up landing the job. Barry will be tasked with elevating a Packers defense that has come up short in big spots in the past two postseasons. The Packers ranked first in offensive DVOA but 17th on defense. Each of Green Bay’s coordinators is now a LaFleur hire, with Pettine being held over from Mike McCarthy‘s final Packers season. 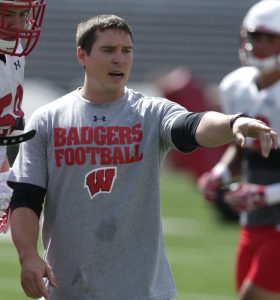 Wisconsin State Journal reporter Tom Oates tweets that Leonhard met with Packers head coach Matt LaFleur via Zoom on Tuesday and in-person on Thursday. After careful consideration, Leonhard determined that “his heart was at UW and in college coaching at this time,” and he ended up rejecting Green Bay’s apparent offer (via Oates).

“It was me choosing UW,” Leonhard told Oates (Twitter link). “I want to stay at UW. I want to be at this level right now. Extremely flattered. Awesome opportunity. But it was not the right time for me to go back to the NFL.”

Following a 10-year playing career, Leonhard joined the Wisconsin coaching staff in 2016. After initially serving as a defensive backs coach, the Wisconsin alumni was promoted to defensive coordinator in 2017. During his first season in his new role, Leonhard was nominated for the Broyles Award, which recognizes the top assistants in the country. Under Leonhard’s watch, Wisconsin has deployed a top-10 scoring defense in three of the past four seasons.

With the 38-year-old Leonhard out of the picture, the Packers will shift focus to one of their many other candidates. We learned this week that LaFleur was set to interview a long list of names as potential replacements for Mike Pettine, including Dolphins DC Matt Burke, Browns defensive line coach Chris Kiffin, Saints D-line coach Ryan Nielsen and Packers secondary coach Jerry Gray. The team has also interviewed Chargers passing-game coordinator Joe Barry, Washington secondary coach Chris Harris and Rams safeties coach Ejiro Evero, along with Bob Sutton and Kris Richard (who have since found gigs elsewhere).

Jim Leonhard, Others In Contention For Packers’ DC Job

The Packers are conducting an expansive search to replace Mike Pettine as defensive coordinator. Several more names joined the early wave of candidates. 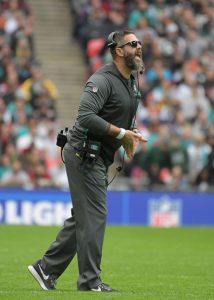 Former Chiefs DC Bob Sutton interviewed for the position recently, according to Rob Demovsky of ESPN.com, who adds five other new candidates emerged on Green Bay’s radar as well. This comes after news of the Packers interviewing former Seahawks DC Kris Richard, Chargers passing-game coordinator Joe Barry, Washington secondary coach Chris Harris and Rams safeties coach Ejiro Evero. Richard and Sutton have since lined up positions with the Saints and Jaguars, respectively. Perhaps a sign about the direction the Packers’ search has taken.

Leonhard, whose NFL playing career wrapped up after the 2014 season, has not coached at the NFL level. But he has been the Badgers’ DC since 2017. Three times in the past four seasons, Wisconsin has deployed a top-10 scoring defense in Division I-FBS. Although Leonhard’s nomadic career did not include a Packers stop, the 38-year-old is a Wisconsin native.

Gray served as the Titans’ DC from 2011-13, spent the next six seasons as Vikings secondary coach and signed on as Packers secondary coach last season. The former NFL cornerback has been an assistant in the league since the late 1990s. Kiffin spent 2020 with the Browns but worked with Matt LaFleur‘s brother Mike with the 49ers previously. Burke oversaw the Dolphins’ defense from 2017-18 and was with the Eagles during the past two seasons, while Nielsen has spent the past four seasons as New Orleans’ D-line coach.

Lardarius Webb has battled a back injury all season, and the Ravens cornerback told Aaron Wilson of The Baltimore Sun that he suffered nerve damage in his back during training camp, severely hampering the start of his season. However, the 29-year-old is starting to regain his old form, and his defensive coordinater believes he’ll be a force for the rest of the season.

“I actually graded the film on the plane on the way back, and then I came in and watched the film again on Monday morning and I texted him right after I got done and said, ‘That’s the best you’ve played all year. You look like you’re kind of getting back to the Lardarius that I know,'” said Dean Pees. “I think that is a very, very positive thing about him. Hey, we need him right here at the end. I was very pleased with the way he played.”

“Yeah, I feel awesome. It was late in the season and everything, but I do feel good now. I’ve been through a long season. I started off on the back burner with a back injury. I’ve just been trying to catch up the whole time and get it right eventually. Now, I’m right.

“That’s how nerve injuries do, they take time. I had to fight through it all year with the good and the bad. It would be perfect going into the playoffs to play your best game. Hopefully, we can continue playing and win this game and go into the playoffs and keep improving on the back end. It’s been a long year, a humbling year. I’ve been through a lot of adversity since I’ve been in the NFL. That’s been my career.”

Vikings running back Adrian Peterson says that he didn’t want a coaching change but he recognizes that his teammates probably did, writes Ben Goessling of ESPN.com. “It was good to have him there, Coach [Leslie] Frazier, but [Mike Zimmer] fits our players better. That’s something I can honestly sit here and say. A lot of guys can’t respond to a Coach [Tony] Dungy, Coach Frazier, guys like that. A lot of guys respond to Coach Zimmer. He’s a better fit for the team,” Peterson said. More from the North divisions..

6:18pm: The Browns announced the signing, tweets Nate Ulrich of the Akron Beacon-Journal.

4:53pm: Well-traveled safety Jim Leonhard has signed with the Browns, the veteran free agent announced today, tweeting, “It’s official, I just signed my 8th NFL contract to become a part of the Cleveland Browns. #dawgpound.” The move reunites the 31-year-old with Browns head coach Mike Pettine, who was the Bills’ defensive coordinator when Leonhard played in Buffalo last season.

Leonhard, a Wisconsin product, has played for four teams since entering the league in 2005, spending time with the Jets, Ravens, and Broncos, as well as enjoying two separate stints with the Bills. After playing primarily in a reserve role in Denver in 2012, Leonhard earned seven starts last season in Buffalo. Pro Football Focus’ advanced metrics (subscription required) ranked him as just the 67th-best safety out of 86 qualified players, but he contributed 41 tackles and four interceptions to a much-improved Bills defense.

For the Browns, Leonhard will look to earn a spot and playing time in a secondary where Donte Whitner and Tashaun Gipson project as the starting safeties. Cleveland won’t have to cut a player to finalize the signing of Leonhard, since the team had a couple open spots on its 90-man roster.

Nothing Imminent Between Leonhard, Packers

Over the weekend, free agent safety Jim Leonhard told WQOW-TV that he’s talked to the Packers about joining the team and seemed to indicate that a deal could be struck this offseason.

“They’re a great organization,” Leonhard said. “I’d love to play for them but it hasn’t worked out up to now. You never know what can happen in the future, but we’ll see.”

However, in a chat with SiriusXM NFL Radio earlier today, Leonhard threw cold water on such talk, according to Alex Marvez of FOX Sports 1 (on Twitter). Leonhard says that his agent is talking with clubs, just as he does every offseason when he’s not under contract, and says a deal isn’t imminent.

Leonhard, who has nine NFL seasons to his credit and 67 career starts, spent last season with the Bills and recorded five pass deflections, four interceptions, and 30 tackles. The 31-year-old is a native of Tony, Wisconsin and attended the University of Wisconsin, so it stands to reason that he would be excited to join up with the Packers. As of right now, however, it sounds like a homecoming is far from guaranteed.

Leonhard has 302 tackles and 12 interceptions over the course of his career with the Bills, Jets, and Broncos. The Packers already have safeties Morgan Burnett, Micah Hyde, and rookie Ha Ha Clinton-Dix in the fold, so it’s unclear how much interest they might have in Leonhard. One would have expected Browns coach Mike Pettine, who has coached Leonhard with three different teams, to come calling, but it doesn’t appear that has happened yet.

The squad likely won’t set any records, but the Lions have quietly built a solid secondary. As Carlos Monarrez of the Detroit Free Press writes, the team’s defensive backfield consists of a former All-Pro (Rashean Mathis), a former Super Bowl champion (James Ihedigbo), a talented former second-rounder (Darius Slay) and perhaps the most talented player of the bunch (Glover Quin). With that depth, the Lions should improve a passing defense that allowed the fifth-most passing yards in the NFC last season.

However, the team looked to have a solid secondary entering last season but struggled initially. Mathis, the oldest of the group, understands that the group has to be ready from day one.

“If we’re press, the ball is ours just as much as it’s theirs. If we’re (off-man coverage), same thing goes. Regardless of what technique we’re showing we’re just going to be more consistent. We didn’t start off well, but we finished well. So to start better is a good thing. To finish how we did last year, we want to finish even better. And we have the tools to do so.”

Let’s check out some more notes from the NFC North…