Ryan Anderson won’t be playing for the Giants in 2021 after all. The outside linebacker signed with New York in the second wave of free agency, but was cut on Monday, the team announced. 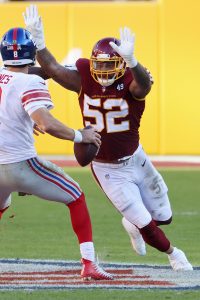 Anderson signed a one-year deal worth $1.125MM, only slightly above the $990K minimum for a player with his service time, back in March. The 49th overall pick of Washington back in 2017, Anderson never really lived up to his draft status. The Alabama product was mostly a reserve during his four years in Washington, but he did make a big impact in 2019.

That season he appeared in all 16 games with four starts, finishing with 44 tackles, four sacks, and five forced fumbles. In 2020, he played in only nine games and had just nine total tackles. Anderson “was expected to compete for a role on the edge,” previously, Dan Duggan of The Athletic tweets, while noting that he “missed the first two weeks of camp with a back injury.”

When he gets healthy he should be able to latch on elsewhere. Anderson will turn 27 later this week.

The Giants have agreed to sign outside linebacker Ryan Anderson to a one-year deal, according to Art Stapleton of The Record (on Twitter). The deal is worth $1.125MM for the veteran’s salary benefit, so it will count for just ~$988K against the 2021 cap.

Anderson, 27 in August, came into the league as a second-round pick out of Alabama. He’s spent much of the last four years as a reserve for Washington, but he showed glimpses of his potential in 2019 as he notched 44 stops and four sacks. He looked especially promising in a late-season game against the Eagles that year, when he came away with two sacks and three forced fumbles. In total, Anderson has 86 tackles and six sacks for his career.

The Giants have been especially active in recent days. On Monday, the Giants agreed a three-year, $39MM deal with free agent cornerback Adoree’ Jackson. And, over the weekend, they inked standout wide receiver Kenny Golladay to a four-year, $72MM pact with $40MM guaranteed.

In addition to the Bills, Ole Miss quarterback Chad Kelly has also met with the Seahawks and Chiefs, as Kelly told SiriusXM NFL Radio (Twitter link). In addition, Kelly said he’s had phone calls with several other clubs. Kelly, the nephew of Bills legend Jim Kelly, is considered a Day 3 prospect thanks a multitude of injury concerns and off-field issues. After recovering quickly from a ACL tear, Kelly underwent wrist surgery in early April and won’t be able to throw for three months. Both Seattle and Kansas City are potentially looking for developmental quarterbacks to play behind Russell Wilson and Alex Smith, respectively.

Virginia Commonwealth’s Mo Alie-Cox isn’t the only collegiate basketball player garnering interest from the Chiefs, as the club also has visits lined up with D.J. Johnson (Kansas State) and Najeal Young (Texas Wesleyan), according to Terez A. Paylor of the Kansas City Star. Johnson, meanwhile, has also set up a meeting with the Bears, per Kellis Robinett of the Wichita Eagle. As Paylor notes, Kansas City has used the basketball-to-football strategy before, as tight ends Demetrius Harris and Ross Travis both played hoops in college. Like Alie-Cox, Johnson and Young aren’t eligible for the draft and are allowed to sign NFL contracts immediately.

With the Jets having a number of holes to fill on both sides of the ball, would the organization really select a tight end with the sixth-overall pick? ESPN.com’s Rich Cimini believes the team has more pressing needs, but he could understand why Alabama tight end O.J. Howard is worthy of a top-10 pick.

Unlike former Jets second-rounder Jace Amaro, Howard can excel in both blocking and receiving situations, so he’d be an every-down player. In offensive coordinator John Morton‘s west-coast offense, the tight end would certainly be relied on to move the chains. Furthermore, his lack of injuries and “high floor” makes him a relatively safe pick.

Cimini has talked to several scouts who regard Howard as a “special talent,” with one evaluator saying that “Howard is the first legitimate tight-end prospect we’ve seen in two or three years.”

Lets check out some more draft notes from around the NFL…

The Browns will host Ohio State safety Malik Hooker for a pre-draft visit Friday, reports Mary Kay Cabot of cleveland.com. The club is “very high on” Hooker and is considering taking him in the first round, adds Cabot, who notes that it might not be in position to land him. The Browns are likely to take Texas A&M edge rusher Myles Garrett first overall, and Hooker could be off the board when their second selection (No. 12) arrives. Hooker underwent surgeries to repair a sports hernia and a torn labrum Jan. 31, causing him to miss the combine, but he’s still likely to come off the board in the first 10 picks.

In advance of its meeting with Hooker, Cleveland ran Clemson quarterback Deshaun Watson through a private workout on the road Thursday, according to Cabot. Watson may well be the Browns’ pick at No. 12.

More of the latest draft notes: