It’s time to add another name to the Ravens’ continually rolling list of running backs. According to Jeff Zrebiec of the Baltimore Sun (via Twitter), the Ravens will be activating running back Lorenzo Taliaferro from the PUP list. Zrebiec notes that the team has also promoted cornerback Robertson Daniel from the practice squad. Safety Kendrick Lewis has been placed on the injured reserve, while tight end Dan Brown has been waived. 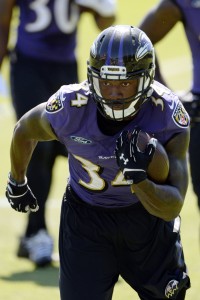 Taliaferro, 24, has had issues staying healthy since entering the league as a fourth-round pick in 2014. The Coastal Carolina product has made 16 appearances over two seasons, running for 339 yards and five touchdowns on 81 carries (4.2 average). Taliaferro also has 13 career receptions for 114 yards. He’ll presumably compete with Terrance West, Kenneth Dixon and Javorius Allen for snaps in the backfield.

Lewis will certainly be missed in the Ravens secondary, although the 28-year-old hasn’t played a significant role this season. After starting 15 games for Baltimore in 2015, Lewis had only collected six tackles this season. The team will be replacing the veteran with Daniel, who has also spent time with the Redskins, Raiders, and Packers. The cornerback was signed to the Ravens’ practice squad earlier this month.

Brown, a former undrafted free agent, had issues establishing himself on a team that also features tight ends Dennis Pitta, Crockett Gillmore, and Darren Waller. In eight career games, the 24-year-old has six receptions for 64 yards.