Breshad Perriman‘s journey around the league will make a stop in Detroit. The former first-round pick agreed to a deal with the Lions, Adam Schefter of ESPN.com tweets. 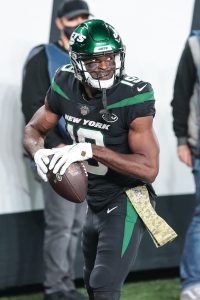 Perriman will sign a one-year, $3MM deal with the Lions, who have also added Tyrell Williams this offseason. Detroit has said goodbye to Marvin Jones and is expected to lose Kenny Golladay soon as well.

This marks an interesting agreement. Perriman’s father, Brett, was a standout for the Lions in the mid-1990s, joining Herman Moore in becoming the first teammates to each catch 100 passes in a season in 1995. Thirty years after Brett signed with the Lions, with whom he played six seasons in a 10-year career, his son will be part of a Detroit rebuild.

The Lions will be Breshad Perriman‘s fifth NFL team. While the younger Perriman did not catch on with the Ravens, who drafted him in the 2015 first round, he has been productive elsewhere. The Browns, Buccaneers and Jets have coaxed 500-plus-yard seasons from the auxiliary wideout. Perriman averaged 17.9 yards per catch with the Bucs in 2019, coming on down the stretch, and he totaled 505 yards and three TDs in 12 games with the Jets.

This move comes after the Lions hired Antwaan Randle El to coach their wide receivers. Randle El was in Tampa during Perriman’s quality season as the Bucs’ WR3. The Browns were also interested in a potential Perriman reunion, but they have since re-signed Rashard Higgins to stay with their Jarvis Landry–Odell Beckham Jr. tandem.

Barring an extension by March 15, Lavonte David will have his first crack at free agency. After playing a key role in helping the Buccaneers win Super Bowl LV, the veteran linebacker will have a strong market.

If the Bucs let David reach free agency, the Browns should be expected to play a role in driving said market. The team has the nine-year veteran on its radar, Mary Kay Cabot of cleveland.com reports.

Chris Godwin and Shaquil Barrett have been the Bucs connected to the franchise tag. While Jason Licht said the Bucs will make a strong push to retain David on a third contract, he could be eager to see what his market looks like. The Bucs have these three, along with Ndamukong Suh, Rob Gronkowski, Antonio Brown and Leonard Fournette, due for free agency.

David and the Bucs spent time negotiating a deal last year but could not come to terms. He then played out the final season of his $10MM-AAV contract. As of late February, the Browns have $20MM in cap space to the Bucs’ $13MM. Cleveland being in the J.J. Watt mix could deplete those funds in advance of unrestricted free agency’s outset, though Tampa Bay has a far more extensive group of internal free agents.

Although the Browns made their first playoff berth in 18 years last season, they ranked 25th in defensive DVOA. One of the NFL’s best linebackers over the past decade, David would check a key box for Cleveland. Going into his age-31 season, David should still be expected to command a lucrative deal. Pro Football Focus graded the former second-round pick as its No. 4 overall off-ball linebacker last season.

The Browns, according to Cabot, are also expected to be interested in Breshad Perriman, a former Ravens first-round pick who has since found better NFL footing with the Bucs and Jets. Another Rashard Higgins contract is also in play for the Browns, who have Jarvis Landry and Odell Beckham Jr. signed through 2021. Perriman caught 30 passes for 505 yards last season, doing so after posting 645 yards in 2019 with the Bucs.

The Jets have found their replacement for Robby Anderson. After watching Anderson agree to terms with the Panthers earlier today, New York will sign Breshad Perriman to a one-year, $6MM deal, as ESPN’s Adam Schefter reports (Twitter link). 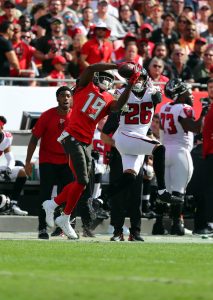 Perriman’s contract can reach up to $8MM with incentives, which is quite a nice payday for a player who not long ago was classified as a first-round bust. The Ravens selected him with the No. 26 overall pick of the 2015 draft, but he was cut prior to the 2018 season after three years of injuries and inconsistent play.

He hooked on with the Browns shortly thereafter and played well enough to earn another contract from Cleveland last offseason. But the Browns allowed him to back out of the deal after they acquired Odell Beckham Jr., and he ultimately signed with the Bucs. Through 12 weeks in Tampa, it again looked like he was going to wash out of the league, but in the wake of injuries to star wideouts Mike Evans and Chris Godwin, he exploded.

From Weeks 15 to 17, the big-play threat caught 17 passes for 349 yards and four TDs and made himself an attractive free agent target. Though he doesn’t have the track record of Anderson, Perriman offers the same field-stretching skill-set. And as most of the remaining starting-caliber wide receivers came off the market today, it appears as if Perriman will have plenty of opportunities with the Jets, even if the team picks up a wideout or two in the draft.

In the wake of injuries to star wideouts Mike Evans and Chris Godwin, Bucs receiver Breshad Perriman put together a very impressive showing at the end of the 2019 season. From Weeks 15 to 17, the big-play threat caught 17 passes for 349 yards and four TDs, so he re-enters the free agent market with plenty of momentum.

It’s quite a swing for Perriman, a 2015 first-round pick of the Ravens who busted out of Baltimore due to injuries and inconsistent play and who caught on with the Browns in October 2018 after being cut by the Ravens and the Redskins the month before. He flashed some ability with Cleveland, and he actually agreed to re-up with the Browns last year before the team acquired Odell Beckham Jr. and allowed Perriman to back out of his deal. The UCF product subsequently signed with the Bucs, and though he didn’t do much through the first 12 weeks of the 2019 season, he made the most out of his increased workload down the stretch.

While Tampa Bay has plenty of cap space, the club will focus most of those dollars on defense and QB. Plus, this year’s draft is remarkably deep at WR, so Jenna Laine of ESPN.com does not expect the Bucs to bring Perriman back (Twitter link).

Perriman, though, will have a market. We heard earlier today that the Jets could make a run at him if they can’t re-sign Robby Anderson, and any number of teams in need of a field-stretching target could be interested.

Bruce Arians has understandably asserted Shaquil Barrett‘s all-time contract year will keep him with the Buccaneers but added the team wants to keep its other high-profile front-seven starters as well. Both Jason Pierre-Paul and Ndamukong Suh‘s contracts are up, but Arians said keeping both will be a top priority (Twitter link via Scott Smith of Buccaneers.com). The veteran HC may have indicated JPP resides slightly higher on the priority list as well, per Greg Auman of The Athletic (on Twitter). Pierre-Paul returned from another scary injury this season and has registered 8.5 sacks in 10 games, giving him 21 in two Bucs seasons. The Bucs hold a great deal of cap space, at $88.9MM, but will likely need to devote a chunk of that amount to Jameis Winston.