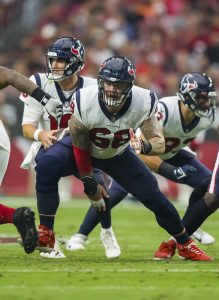 After missing the 2020 season, Justin Britt appears to have secured an opportunity. The veteran offensive lineman is signing with the Texans, according to his Instagram. 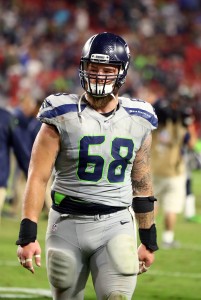 This Houston agreement, which NFL.com’s Ian Rapoport indicates is worth $3.2MM and could max out at $5MM (Twitter link), marks a rebound chance and a potential buy-low player for a Texans team in transition at center.

Britt made multiple visits during the 2020 campaign but did not land a gig. The Seahawks cut him shortly after the draft last year, and that move came after he tore an ACL in October 2019.

The Texans released longtime center Nick Martin last week. Prior to missing the past 1 1/2 seasons, Britt was a full-time Seahawks starter. He spent the 2016-18 seasons as Seattle’s center, not missing a game, and has also enjoyed full seasons at guard and tackle.

A former second-round pick, Britt will turn 30 ahead of Week 1. He visited the Seahawks before the start of last season and made a trip to Kansas City to meet with Chiefs brass during the team’s playoff run. With neither producing a contract, Britt is set to join a Texans team potentially readying for a rebuild. Whether he will make any snaps to Deshaun Watson remains uncertain.

Justin Britt has not played during the 2020 season, with his April Seahawks release sending him to what has become a lengthy free agency stay. But the Chiefs are investigating the former Seahawks offensive line starter.

The Chiefs brought Britt in for a visit Thursday, Field Yates of ESPN.com tweets. Britt underwent knee surgery in 2019 and has not played since Week 8 of that season. But the 29-year-old blocker brings five-plus seasons’ worth of starting experience and, if healthy, profiles as an interesting depth option or starting candidate for a team.

Britt played his high school and college ball in Missouri, becoming a second-round pick out of Mizzou in 2014, and has spent an entire season at each of the three primary O-line positions as a pro. The Seahawks used Britt as a tackle, guard and center. The center role became Britt’s long-term NFL spot, with the Seahawks using him as their starting snapper from 2016-19. Britt played right tackle as a rookie, starting there in Super Bowl XLIX, and left guard in Year 2. He was a starter in every game he played with Seattle.

Two former Seahawks were back at the team’s facility Wednesday. Justin Britt joined Paul Richardson in meeting with team brass, per Field Yates of ESPN.com (on Twitter).

The Seahawks used Britt as a starting offensive lineman from 2014-19 but released him shortly after the draft. No team has brought the veteran center in for a visit since. No Britt-Seahawks reunion is imminent, Adam Caplan of Sirius XM Radio tweets.

Seattle brought in former Pittsburgh part-time starter B.J. Finney to play center this offseason, so it is certainly interesting to see the team reach out to Britt four months after cutting him. However, Britt has been a full-time starter at guard (2015) and tackle (2014). He spent the past four seasons as Seattle’s starting center, earning a contract extension in 2017 for his work in that role. This would be Britt’s age-29 season.

The Cardinals used their first-round pick on Clemson’s Isaiah Simmons, widely regarded as one of the more versatile draft prospects in recent memory. Arizona defensive coordinator Vance Joseph told the media Tuesday that Simmons would primarily be a linebacker in the NFL, but that overall he’d be a “problem-solver” for the defense, via Darren Urban of the team’s official site.

Urban notes that Joseph said while he might not be able to do all the things he did in college, he still wants “Isaiah to be Isaiah.” Simmons played safety, corner, and linebacker at Clemson. “”If it’s a job that we think he can do, we will put him out there,” Joseph said. That echoes what Cardinals head coach Kliff Kingsbury has said since the draft, and it sounds like the team still isn’t sure exactly how they’re going to use him.

The Seahawks continue to overhaul their offensive line. Just a couple hours after we heard that the team was releasing guard D.J. Fluker, they’ll also be cutting center Justin Britt, Bob Condotta of the Seattle Times confirmed (Twitter link).

Aaron Fentress of The Athletic was the first to report the news on Twitter. Britt spent the past six seasons in Seattle, and was a full-time starter for all of them. Originally a tackle and then a guard his first two years in the league, he made the switch to center in 2016. Britt was heading into the final year of his contract and the team will save $8.5MM in cap space by cutting him, although they will incur a $2.9MM dead cap hit, Condotta notes in the Times.

The release of Fluker saved about $3.7MM, so the Seahawks cleared a significant amount of space today. They’ve been making moves on the offensive line all offseason, and the unit is going to look considerably different in 2020. Joey Hunt, who started the second half of last season, former second-round pick Ethan Pocic, and B.J. Finney are all candidates to start at center. Finney was signed to a two-year, $8MM pact this offseason.

Britt started the first eight games of last season before tearing an ACL in an October game against the Falcons. Britt will turn 29 in May, and we haven’t heard much about his recovery, although Sirius XM NFL insider Adam Caplan did tweet that he hasn’t had any setbacks. Coming off the devastating injury he’ll likely have to settle for a prove-it deal despite playing at a high level in the past.

It’s possible the Seahawks are attempting to clear space for a bigger move like re-signing the still-available Jadeveon Clowney, but that’s far from definite.

Justin Britt will be sticking around Seattle through at least the 2020 season. ESPN’s Brady Henderson reports that the Seahawks have picked up the center’s $5MM option.

As Henderson details, picking up the option was necessary if Seattle wanted to keep Britt for several more seasons. Declining the option would have voided the final year of the deal, which would have allowed the lineman to hit free agency following the 2019 season.

That would have also boosted Britt’s 2018 base salary from $2.75MM to $7.75MM, which is a pretty drastic uptick. By picking up the option, that extra $5MM will now translate in the form of a bonus, and his cap number remains at $6.17MM. These details are all part of the three-year, $27MM extension the 26-year-old signed last offseason.

The 2014 second-round pick has spent his entire career in Seattle, and he’s started all 63 games he’s appeared in since entering the league. After earning a top-10 center rating in 2016, Britt took a bit of a step back in 2017. Pro Football Focus ultimately ranked the veteran 17th among 36 eligible center candidates.