Trey Burton‘s second Bears season has not gone well, and it will end with the tight end on IR. The Bears will shuttle the sixth-year player to their IR list, according to Field Yates of ESPN.com (on Twitter). 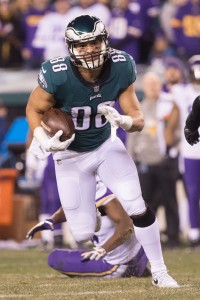 Burton is battling a calf injury that kept him out of practice this week. The Bears will promote linebacker James Vaughters from their practice squad to take the open roster spot. Burton missed Bears offseason activities due to sports hernia surgery but was ready by Week 1.

After catching 54 passes for 569 yards and six touchdowns in his Chicago debut season, Burton will close his 2019 slate with 14 receptions for 84 yards and no scores. Still, Burton’s 84 yards lead all Bears tight ends. This has obviously been a trouble spot for an offense that has fallen well off its 2018 performance level. Adam Shaheen, a 2017 second-round pick, has just nine grabs for 74 yards in eight games.

Burton’s four-year, $32MM contract runs through the 2021 season. It calls for a $7.5MM dead-money charge, with barely $1MM in cap savings, were the Bears to cut Burton after this season. It’s likely the ex-Philly Special passer will be back next season in an attempt to bounce back from essentially a lost year. But tight end will likely be a need for the Bears, whose 2017 Dion Sims addition also did not work out.