Austin Larkin could end up making his NFL debut this weekend. The Falcons announced that they’ve promoted the defensive end from the practice squad. Larkin will take the roster spot that was previously held by offensive lineman Sean Harlow, who was cut yesterday. 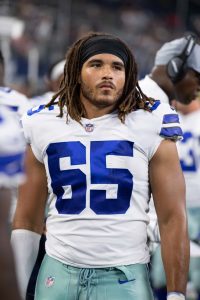 Atlanta’s defensive end corps is currently struggling with injuries. Takkarist McKinley is listed as questionable for tomorrow’s game with a shoulder injury. Fellow defensive linemen John Cominsky and Adrian Clayborn are also ailing, so the Falcons were clearly in need of some reinforcement.

In comes Larkin, who was a standout for the Falcons during the preseason. The Purdue product had 11 tackles, one sack, and two tackles for loss, landing him a role on Atlanta’s practice squad. He’s had three separate stints with the organization this season, and this is the first that’s led to a promotion.

Considering the injuries, Larkin could end up getting some playing time against the Buccaneers. Vic Beasley, Allen Bailey, and Jacob Tuioti-Mariner are the only other healthy defensive ends on the active roster.