Searching for a new offensive coordinator for the second time in three years, the Eagles are likely to look outside the organization to replace Mike Groh. Candidates with disparate backgrounds are emerging. 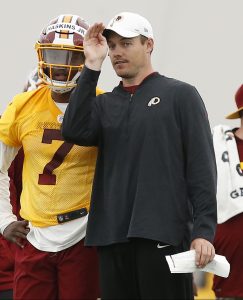 Doug Pederson canned Groh despite the Eagles’ late-season showing with a skeleton-crew offense, and with the team not preparing to promote quarterbacks coach Press Taylor, it opens the door to the prospect of an outside hire taking over. The Eagles do, however, have Duce Staley in place as assistant head coach and running backs instructor. He could conceivably be a candidate, though the team opted to promote Groh over him for the post Frank Reich vacated two years ago.

After the Lions fired Caldwell following a four-year tenure, he resurfaced in Miami on Brian Flores‘ staff. But a medical issue forced the 64-year-old coach to take a leave of absence shortly after accepting that role. Caldwell, however, received clearance to resume coaching recently. He has seven seasons’ worth of experience as HC — one of those producing an AFC championship season in Indianapolis — and was promoted to Ravens OC late in their 2012 Super Bowl season.

The Redskins opted to reunite Ron Rivera with Scott Turner, the latter replacing O’Connell as their offensive coordinator. Like Groh, O’Connell dealt with an ever-changing offensive core. But Washington ranked 30th in offensive DVOA last season. Still, O’Connell has been connected to the Browns and Rams, with the Cleveland connection potentially hinging on whether the franchise hires Josh McDaniels.

Jim Caldwell Back To Full Health

This year, Caldwell is once again on the Fritz Pollard Alliance’s list to be a head coaching candidate. It’s not clear if he’ll garner interest as a head coach, but he has the support of Dolphins HC Brian Flores.

“He’s been a great coach for a long time. He’s someone who’s been a mentor, someone I can bounce ideas off the entire season,” Flores told reporters on Friday. “Great coach and he would be very worthy of a head coach in this league. I’ll say that over and over and over again.”

For what it’s worth, Caldwell does want to return to the sidelines in 2020, as Jason La Canfora of CBS Sports writes. La Canfora does expect Caldwell to get some consideration from teams looking for an HC.

Caldwell has been coaching since 1977, and he’s held NFL gigs since 2001. He had a three-year stint as the head coach of the Colts that included a Super Bowl appearance. Caldwell later moved on to become the head coach of the Lions, and he compiled a 36-28 record during his four years in Detroit. Since then, he’s had a handful of head coaching interviews, including talks with the Packers, Jets, and Browns.

The Dolphins have officially announced Jim Caldwell as their assistant head coach/QBs coach. Interestingly, their press release did not mention the hiring of Dom Capers as defensive coordinator, a move that has been expected over the last week.

Caldwell, the former Colts and Lions head coach, interviewed with the Browns, Cardinals, and Jets this offseason for their head coaching vacancies. The Lions made the postseason twice during Caldwell’s tenure in Detroit. And, with the Colts, his teams went 26-22 with one AFC title and two divisional championships.

New Dolphins head coach Brian Flores does not have previous head coaching experience, but Caldwell can provide valuable counsel for him in his first year at the helm.

Capers, 68, recently turned down the Bengals’ DC job, leading many to believe that he would be sign on for the same role in Miami. As of this moment, that has not happened.

Here are the latest coaching rumors from around the NFL:

The Jets interviewed Jim Caldwell for the club’s head coaching vacancy, according to a team announcement. Caldwell most recently served as the Lions’ head coach from 2014-17, but also had a multi-year stint with the Colts.

Caldwell has been on the Jets’ radar for a while now, but they did not solidify a scheduled time to meet until recently. Caldwell, admittedly, would not be the sexiest choice, but he would offer experience and likely would not seek total control over the 53-man roster. Many of the other names in this year’s pool may want that power, but ownership says that GM Mike Maccagnan will continue to have full authority over personnel.

The Lions made the postseason twice during Caldwell’s tenure in Detroit. And, with the Colts, his teams went 26-22 with one AFC title and two divisional championships. 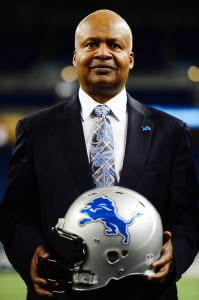 Caldwell, 63, has been fired twice and spent less than five years combined in Indianapolis and Detroit. On the plus side, he has a career record of 62-50 and was the first Lions coach to guide the team to multiple playoff berths in many years.

As shown in PFR’s 2019 Head Coaching Search Tracker, the Cardinals also have Dan Campbell, Adam Gase, Kliff Kingsbury, and Zac Taylor on the radar. Chiefs offensive coordinator Eric Bieniemy declined to interview with Arizona and former Packers head coach Mike McCarthy is reportedly not interested in moving far away from his family in Wisconsin.

Caldwell has also interviewed for the Packers’ HC job and will meet with the Jets about their job opening.

The former Colts and Lions head coach did not work in the NFL in 2018, joining John Fox and Chuck Pagano — also fired after the ’17 season — in that regard. The Lions took a step back after Caldwell’s exit, falling from back-to-back 9-7 seasons to 6-10 in Matt Patricia‘s first year.

While Caldwell, 63, has been fired twice, and served less than five years in both Indianapolis and Detroit, he has a career record of 62-50 and was the first head coach to guide the Lions to multiple playoff berths since Bobby Ross in the late 1990s.