In February, the Lions released Damon Harrison with two years to go before his contract. Long before that, Harrison says he was looking for a way out of Detroit.

“I came into [2019 training] camp in shape, but during the first three weeks of camp I think I kind of worked myself out of shape because I wasn’t doing anything,” Harrison told Chris Long on a recent podcast (transcript via Dave Birkett of the Detroit Free Press). “That was a time where, to be honest with you, we were trying to facilitate a trade. I was hell-bent on getting out of there.”

In fact, Snacks says he knew the Lions were a bad fit as soon as he came over via trade with the Giants. Harrison excelled as a run-stuffer for both New York teams, but he didn’t think that he could thrive in Matt Patricia‘s defense.

“To be completely honest with you, I didn’t want to go to Detroit because of some things that I heard from some guys in the past and some guys who were there,” Harrison said. “So when I got the call..I didn’t answer the phone for a couple hours. [Lions GM] Bob Quinn was calling me and I didn’t pick up the phone because I was trying to figure out a way to get out of it.”

Now, Harrison is free to find the team that fits him best. Still on the market, Snacks will likely land a deal sometime after the draft.

The Lions and veteran cornerback Darryl Roberts are in agreement on a one-year contract, per Tom Pelissero of the NFL Network (Twitter link). Roberts was released by the Jets last week. 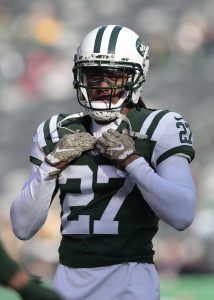 After trading Darius Slay to the Eagles, Detroit was in need of an experienced boundary corner. Although the club did sign Desmond Trufant, the second option on the depth chart before the Roberts signing was slot man Justin Coleman.

The Lions have been linked to Ohio State CB Jeff Okudah, one of the most talented defenders in this year’s draft, and adding Roberts will certainly not preclude Detroit from selecting Okudah, who is said to be very high on the team’s draft board. On the other hand, the Lions do have a number of holes to fill and they already own four of the first 85 picks in the draft, so they may now be more amenable to trading down from the No. 3 pick to further stock up on draft capital while still giving themselves the opportunity to draft a player like Derrick Brown.

Roberts, 29, is not one of the league’s best corners, but he does have 56 appearances and 26 career starts to his credit, including back-to-back 10-start seasons in 2018-19. The former seventh-round pick inked a three-year, $18MM deal with the Jets in March 2019, but he graded out as an average-at-best player, per Pro Football Focus’ advanced metrics. So the Jets’ new regime dropped him in order to save $6MM against the books.

In his four years of regular season action, Roberts has accumulated 172 tackles to go along with three interceptions and 27 passes defensed.

Today, 4:05pm: Christian won’t be joining the Jets after all. Brian Costello of the New York Post reports (via Twitter) that the Jets couldn’t agree to “final contract terms” with the free agent safety.

March 21st, 3:30pm: Both of the Jets’ 2019 Week 1 starting cornerbacks are now off the team. The Jets released four-year contributor Darryl Roberts on Saturday.

Roberts is gone despite signing a three-year, $18MM deal in 2019 to stay in New York. The Jets have changed GMs since and saved $6MM by making this move. Roberts would have been guaranteed $2MM of his 2020 salary on Sunday.

The Jets used Roberts on 713 defensive snaps last season — most among their corners — but the 29-year-old defender will need to find a new team to continue his career. Roberts graded as Pro Football Focus’ No. 81 full-time corner last season — well behind some younger Jet contributors. While the Jets have not made splash moves at corner this offseason, they did re-sign slot man Brian Poole — PFF’s No. 9 corner in 2019 — and have Bless Austin and Arthur Maulet on the roster.

In addition to dropping Roberts, the Jets will bring in safety Marqui Christian. The former Rams safety and the Jets agreed on a one-year deal, Manish Mehta of the New York Daily News tweets.

Since going in the fifth round of the 2016 draft, Christian played in 55 games — all with the Rams — and contributed as a reserve defender and on special teams. The Division II product made 36 tackles in each of the past two seasons. One of this year’s youngest UFAs, Christian will not turn 26 until October.

The Vikings are on the lookout for cornerback help and former Jets CB Darryl Roberts is on their radar, as Chris Tomasson of the Pioneer Press tweets. Ditto for Kevin Peterson, who was recently non-tendered by the Cardinals, according to Darren Wolfson of KSTP (on Twitter).

Roberts, entering his fifth pro season, spent his entire career with the Jets up until his release last Saturday. The Vikings, who just watched Xavier Rhodes leave for the Colts, are among the teams with interest.

Roberts may not be a glamorous addition, but he would offer experience to the Vikes’ group. He’s got 56 appearances and 26 career starts to his credit, including 13 games and ten starts in 2019. He also had one of his best performances against the Vikings a couple years back – a career-high eleven tackles (with two tackles for a loss) in 2018.

The former seventh-round pick inked a three-year, $18MM deal with the Jets in March of last year. One year into it, the Jets’ new regime dropped him in order to save $6MM against the books.

This time around, Roberts figures to cost a bit less, and a one-year deal would probably make sense for both the player and the team that signs him.

The Jets are set to re-sign cornerback Darryl Roberts, according to Manish Mehta of the Daily News. Terms of the deal are not yet known.

New defensive coordinator Gregg Williams is likely planning some big changes on defense, but Roberts apparently fits his vision Last year, Roberts made ten starts and played in 65% of the team’s defensive snaps. He also played a significant role on special teams. For his career, Roberts has made 16 starts.

In other Jets cornerback news, the club has opted against retaining Morris Claiborne.