The Vikings are adding another veteran to their cornerback room. They agreed to a deal with Tye Smith on Wednesday, according to veteran NFL reporter Josina Anderson (on Twitter). 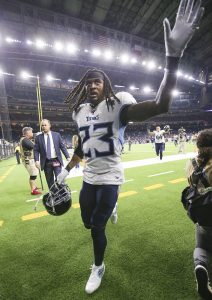 A former fifth-round Seahawks pick, Smith has played for the Titans since 2017. Tennessee re-signed the veteran backup to one-year deals in 2019 and ’20. Smith’s Vikings pact is a minimum-salary agreement, Anderson notes.

The Titans deployed Smith as a part-timer on defense, using him just under 20% of their defensive plays in each of his active seasons (2017, ’19 and ’20). Last season, he logged 125 defensive snaps. Smith, 27, has experience on special teams but only saw action on 15% of Tennessee’s special teams snaps in 2020. The Division I-FCS product started three games in 2019 as well and forced two fumbles that season.

Minnesota has been active at cornerback this offseason. Mike Zimmer‘s team reunited with sixth-year veteran Mackensie Alexander; he will join All-Decade corner Patrick Peterson, who is entering his 11th season. They agreed to one-year deals in March. The Vikings used first- and third-round picks on corners in 2020, but an offseason arrest has injected uncertainty into first-rounder Jeff Gladney‘s career. Minnesota traded 2018 first-rounder Mike Hughes to Kansas City a few weeks back.